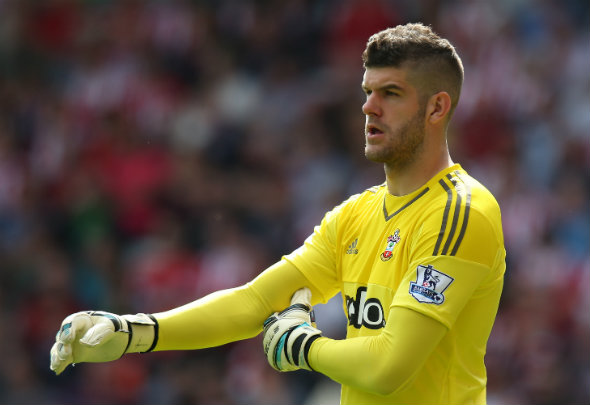 Everton are currently enduring a poor run of form, which has brought just one victory in their last 10 fixtures.

The results have highlighted several weak areas in the Toffees squad and one of those positions is the goalkeeper.

Maarten Stekelenburg, 34, currently occupies the number one spot, but a disastrous mistake against Manchester United on Sunday has further highlighted that he is not good enough for Everton.

This means that the Toffees should look to strengthen in January and Football Insider has analysed three candidates Ronald Koeman may look to sign:

Koeman’s former number one on the south coast was also involved in a calamitous error on the weekend.

However, it was very uncharacteristic of the 28-year-old, who conceded just 17 goals in 18 fixtures under Koeman last season.

The Dutch manager initially brought Forster back to England in a £10million deal from Celtic in 2014 and he could seek a reunion at Goodison Park.

The Netherlands international goalkeeper could be tempted by a move to a team led by one of his national side’s legends.

The 27-year-old shot stopper is also considered the second choice goalkeeper behind Mac-Andre ter Stegen at the La Liga giants and he may want more first team football.

The Toffees would present a good opportunity to Cillessen and the club would in turn benefit from a top quality goalkeeper.

The 22-year-old has rose to fame this season and has cemented his place as the Black Cats number one following an injury to Vito Mannone.

Despite keeping just one clean sheet in 12 Premier League fixtures this season, Pickford’s displays have been the difference between a modest defeat and a hammering.

Sunderland are fighting against relegation again this season and the young goalkeeper may be keen to move to a bigger side.

Everton would secure a good goalkeeper with his signature and one who can grow to become one of the best in the future.

In other Everton transfer news, the Toffees are eyeing a move for this proven Manchester United ace.