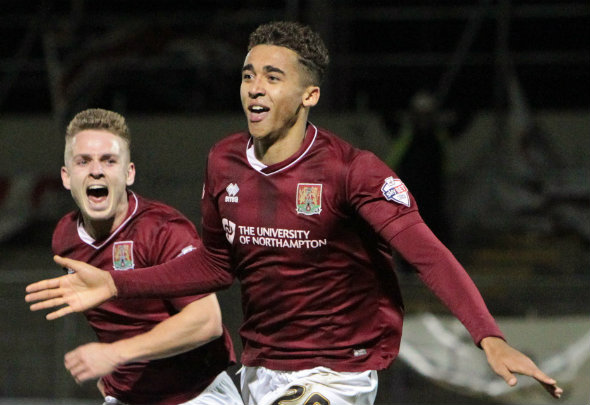 Everton are closing in on a deal for Sheffield United’s Dominic Calvert-Lewin, according to a report.

The striker has been at United for over ten years, but caught the eye of the Toffees after an impressive loan spell with Northampton Town in League Two.

The Liverpool Echo claim the Toffees are willing to pay £1million up front for the 19-year-old and are confident a deal can be struck.

Calvert-Lewin has made 11 senior appearances for League One side United, with nine of those coming at the end of last season as a reward for his form at Northampton.

The Sheffield native scored eight goals and provided one assist in 26 games in all competitions for Northampton.

Calvert-Lewin would go straight into Everton’s Under-21 set-up and become the third young recruit of the summer if he was to sign with Everton already confirming deals for Coventry City striker Bassala Sambou and Oldham Athletic goalkeeper Chris Renshaw.

Everton kick off their Premier League season with a home tie against last season’s runners-up, Tottenham.

The Toffees begin their pre-season action with a trip to Barnsley on July 23.

In other Everton news, the Toffees have been given a boost ahead of the new season with their defender opting out of international commitments.