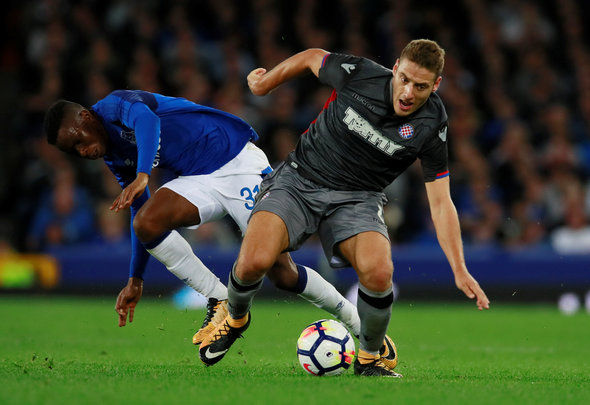 Everton are close to sealing an £8million swoop for Hadjuk Split forward Nikola Vlasic, according to a reliable journalist.

The Daily Mirror’s northern reporter David Anderson claimed on his personal Twitter account on Monday night that the Toffees are on the verge of completing the signing of Vlasic, 19, as Ronald Koeman’s search for a new striker ends.

Everton are close to signing Nicola Vlasic from Hajduk Split for £8m to end Ronald Koeman's search for a new striker….

Sandro Ramirez and the out-of-favour Oumar Niasse are currently Everton’s only traditional striker options while Wayne Rooney is also able to lead the line of attack.

Vlasic, who played in both of Everton’s Europa League clashes against Hadjuk in recent weeks, is more naturally a winger, but can also play in a No 10 role or as an out-and-out striker.

It is understood that Koeman is looking at the one-time Croatia international forward as a striker who can support Sandro for the most part of the season.

The Hadjuk star has already been in good form for his club this season, scoring two goals in 11 appearances across all competitions.

Last term, when he was aged just 18, Vlasic was handed the captain’s armband on the odd occasion as he finished the campaign with four goals and nine assists in 37 total matches.

It may be annoying for Everton supporters that Koeman hasn’t been able to bring in a big name to replace Romelu Lukaku in attack. The Belgian, who left for Manchester United earlier this summer, left some big shoes to fill and it’s unlikely that Sandro will be able to get the consistent 20 or more goals a season that Lukaku did. Vlasic is very much a cheap buy, but he is going to turn into a very good prospect in the future. He is typically a winger, so it seems strange that Koeman will see him as his back-up striker for the rest of the season.

In other Everton news, the Toffees have named their price for this 27-year-old earning a stunning £80,000-a-week at Goodison Park.