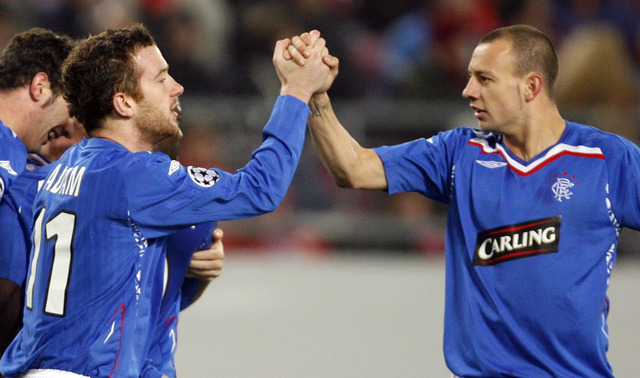 Alan Hutton has taken a cheeky jibe at former Rangers star Kris Boyd about his fitness levels ahead of the legends game against Liverpool on Saturday.

The former Gers defender and boyhood fan of the Bears, speaking exclusively to Football Insider assistant editor Russell Edge, says that the 36-year-old was not the fittest of players throughout his career and he cannot wait to see how he gets on after hanging up his boots this summer.

Boyd and Hutton are both among the Rangers squad who will welcome Liverpool’s old boys to Ibrox on Saturday afternoon, with tickets being sold for the Light Blues’ charity foundation.

⚽️ The #RangersFC and @LFC squads for Saturday's Legends Match at Ibrox.

Speaking about returning to Ibrox to play for his old side, Hutton took a cheeky jibe at the former striker and says he is looking forward to seeing how Boyd gets on now he is out the game for good.

Hutton told Football Insider: “I’m actually looking forward to seeing some of the older, well, ‘older’ boys like Kris Boyd who, let’s should we say, maybe he wasn’t the fittest when he was playing.

“So to see them after retirement and now it’s been a year or so I can’t wait to see some of them. I’m really looking forward to seeing some old faces as well, the likes of Nacho Novo as well that I’ve not seen in a long time.”

Boyd played 212 times for Rangers during his time in Glasgow, scoring 115 goals and writing his name into the Ibrox history books with two league titles, two Scottish Cups and two Scottish League Cups to his name.

In other Rangers news, Hutton has told Football Insider that he has “only heard good things” about one Gers player rarely seen by the fans.