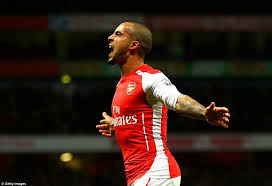 The Gunners have opened negotiations with the England international on a new deal by offering him a four-year package worth £90,000-a-week.
This is a drop on Walcott’s current £100,000-a-week salary and a pay cut is unlikely to be accepted by the player, who wants a rise in wages.
As revealed by Football Insider, the 26-year-old is seeking a five-year contract worth £130,000-a-week that would catapult him into the top tier of earners at Emirates Stadium alongside Mesut Ozil and Alexis Sanchez.
However, Arsenal are unwilling to sanction that kind of deal for a player who has been on the fringes of the team since returning from injury last November.
Walcott will have only a year to run on his contract in the summer and manager Arsene Wenger has already made it clear that he expects negotiations to be far from easy.
Football Insider understands that Arsenal do not want talks to drag on into next season, raising the possibility that interest from Chelsea and Liverpool will be seriously considered if Walcott does not accept the deal on the table.
Wenger wants Walcott to stay at the club he joined from Southampton in January 2006 but the forward missed almost the whole of 2014 through injury and has made just five starts this season.
The 25-year-old has found himself behind Sanchez, Ozil, Olivier Giroud, Danny Welbeck, Alex Oxlade-Chamberlain, Santi Cazorla and even midfielder Aaron Ramsey in the pecking order for the first-team attacking roles.
Walcott had the upper hand when he signed a new deal in January 2013, but Arsenal are likely to feel they now hold the cards due to the player’s struggle to get into the team.
Wenger has claimed that Arsenal have started contract talks with Walcott’s camp but the player took to Twitter earlier this month to deny that.
“We have started very early with him,” said Wenger. “He is very quick on the pitch, but off the pitch not always.
“Walcott was difficult to convince (in 2013) and that is why it took us much time. I always wanted to keep him and I still want to keep him now.
“I want him to stay and be a regular player and fight for his place, but no matter where you go if it is a big club you have to compete for your place.”