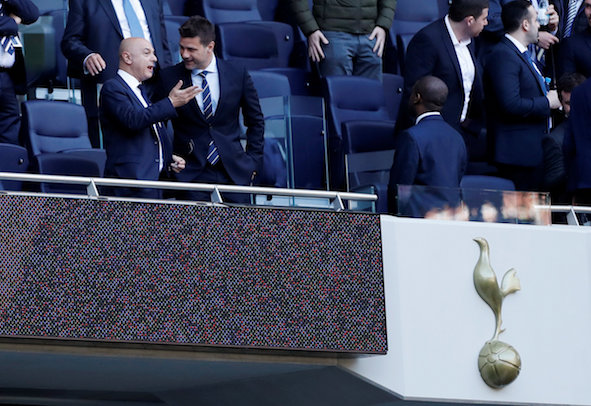 Danny Mills suggests that Tottenham manager Mauricio Pochettino will already have several “offers on the table” as he weighs up his future in north London.

Speaking exclusively to Football Insider assistant editor Russell Edge, the former Manchester City and England international says that his overachievement at the club, taking them from top-six hopefuls to top-four regulars and Champions League finalists, means he will be a man in demand should he leave.

Pochettino has been with the Lilywhites since 2014, although is yet to win any silverware with the north Londoners since joining from Southampton.

Mills says that Spurs’ transformation under the Argentine boss means that the manager will be able to determine his own future, suggesting there are already clubs lining up for his capture.

Mills told Football Insider: “I think Mauricio Pochettino has done such a good job at Tottenham that he will pick and choose when he wants to leave and where he wants to go.

“I wouldn’t be surprised if he’s got several offers on the table. If he was to suddenly say: ‘Right, I’ve had enough, I want a new challenge, I want to move on,’ there would be several clubs around the world that would want to snap him up in an instant.

“Is that going to happen with the way things are going, the investment that’s happened over the last few years? Do we see that happening?

“Is he thinking: ‘I’ve done my best, I’ve not really been backed, I’ve punched above my weight, I’ve achieved far greater results than anyone ever expected,’? Of course he’s going to be looking round.”

Spurs have had a tough start to the 2019/20 campaign under Pochettino, winning three, drawing two and losing three of their opening eight Premier League games, including a 3-0 defeat to Brighton before the international break.

They were knocked out of the League Cup by Colchester United, while they have failed to win in their opening two Champions League games, drawing versus Olympiacos and being thrashed 7-2 by Bayern Munich.

In other Tottenham news, Darren Bent says that the club are chasing a “great signing” as they plot transfer missions for a Premier League powerhouse.