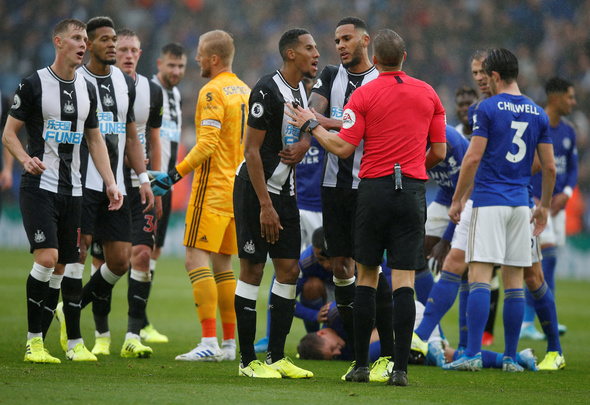 Danny Mills has blasted Newcastle United midfielder Isaac Hayden for letting “the team down” with his red card in the 5-0 defeat to Leicester City.

The former Leeds and England full-back, speaking exclusively to Football Insider assistant editor Russell Edge, says that the 24-year-old lost his head against the Foxes after he lunged into a tackle on Dennis Praet on Sunday afternoon.

The Magpies were humiliated by Brendan Rodgers’ men at the King Power Stadium, Hayden’s dismissal meaning Steve Bruce’s men were left with 10 men for the whole of the second half.

Mills says that while it is easy to get frustrated as a player when your team are playing poorly, you need to stay focused and professional and that Hayden let both himself and his teammates down with his rash decision.

“It was poor and that’s the problem, moments like that you need to keep your head,” Mills told Football Insider.

“It doesn’t matter what the score is, if there are olés from the crowd or whatever it might be, you’ve got to keep your cool, otherwise you start to let yourself down and let the team down.

“That’s the last thing you need.”

Hayden has been a mainstay in the midfield for Steve Bruce this season, having played every minute of the club’s Premier League fixtures before his sending off on Sunday.

He will now serve a three-game ban for his dismissal, meaning he misses the home ties against Manchester United and Wolves, which sandwich a trip to Chelsea.

With an international break coming between the clash against the Red Devils and the visit to Stamford Bridge, Hayden will not be eligible to appear for Newcastle until the start of November.

In other Newcastle United news, Darren Bent has been left fuming to Football Insider about one senior star’s “horrible situation”.