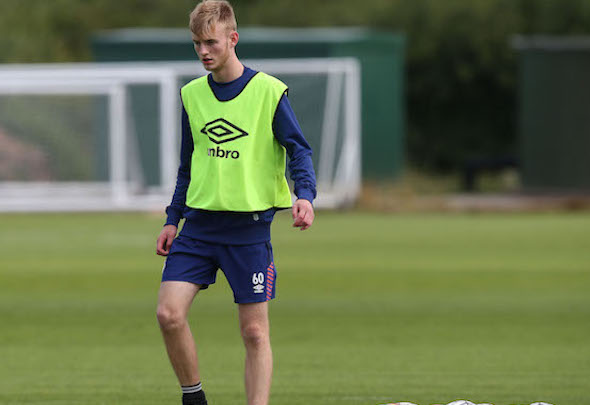 New documents registered with the Football Association show that the left-sided forward, 18, had his contract cancelled by mutual consent on 15 February.

There has been no announcement from the Merseyside club about Kinsella leaving, and the player still has a profile on the official Everton website.

But paperwork on the official FA website shows that the youngster’s contract freed him to end his decade-long association with Everton in the middle of last month.

Dublin-born Kinsella joined the Premier League big hitters from Irish club Templeogue United in the summer of 2014, when he signed a scholarship contract with the academy.

He had subsequently extended his Toffees deal until the summer of 2018 but the club have taken the decision to terminate it early after he completed a deadline-day loan move back to his native Ireland in the January window.

It was announced by Everton on 31 January that Kinsella, who has been capped by the Republic of Ireland at Under-16, Under-17 and Under-19 level, had signed for Dundalk on loan for the League of Ireland season.

The League of Ireland season runs from the end of February until October 27.

It comes after Kinsella spent the second half of 2016 on loan at Saint Patrick’s Athletic, where he made 10 league appearances.

In other Everton transfer news, the giants have won the race to sign a 32-goal striker who has taken the league by storm.