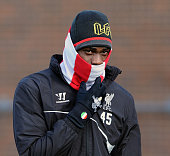 The Serie A club have targeted the Liverpool striker as they weigh up options to reinforce their attack this summer.
As reported by Football Insider, the Merseysiders will listen to offers for Balotelli as well as his team-mates Fabio Borini and Rickie Lambert. The trio is deemed surplus to requirements by the Liverpool hierarchy as plans continue to recruit two new strikers in addition to on-loan front man Divock Origi.
Fiorentina want a new striker after having to cope without first-choice pair Mario Gomez and Giuseppe Rossi for lengthy periods.
Gomez has been blighted by injuries since joining from Bayern Munich in 2013 and Rossi has not yet played for the Viola this season after undergoing knee surgery.
Balotelli has had a disastrous season for Liverpool after signing from AC Milan in a £16million deal last summer. He has scored just four goals in 28 appearances, only one of which has been in the Premier League.