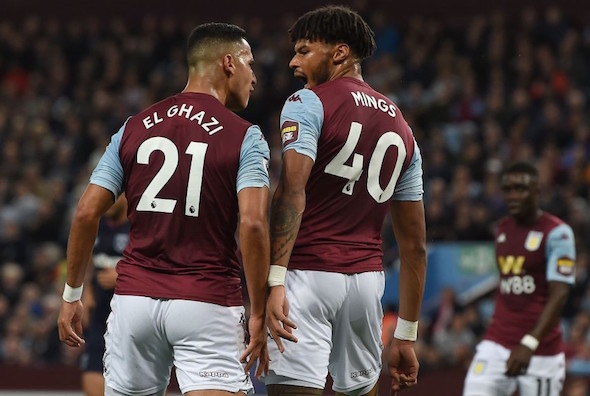 Speaking exclusively to Football Insider correspondent Russell Edge, the former Villa defender who left in the summer after eight years at the club claimed the hot-tempered winger is a popular figure in the dressing room.

Hutton explained that El Ghazi got on with “all the boys” in a revealing insight into his personality following last night’s controversy in the goalless draw against West Ham.

El Ghazi and Mings were told to cool it by referee Mike Dean after the stars angrily locked heads in the Villa area following the defender’s accusation of the attacker that he had not tracked back in the lead-up to conceding a corner in the 35th minute.

Asked for his verdict on El Ghazi, Hutton told Football Insider: “All the ability in the world; fast, strong and a really, really nice guy
as well, really got on with the full group.

“He did love it (at Villa), all the boys got on well with him and he was a great guy to be around so it doesn’t surprise me that he’s doing well.”

Villa boss Smith insisted there will be no further action following the incident but when asked about Dutchman El Ghazi’s temperament admitted: “He’s got a bit of red mist in him.”

The Holland international, 24, was signed by Villa from Lille in the summer of 2018 on a loan-to-buy deal that became permanent in the recent summer window.

“He took his time to settle, I think he had a situation as his own club where he probably wasn’t playing as much as he wanted,” Hutton added to Football Insider. “So I mean these things take time, especially a foreign player coming into a league that he doesn’t know.

“It was another addition that we thought he could make the difference in games and yeah he really did go on to prove that.

“He definitely flourished under Dean Smith, this is what I’m saying about Dean Smith. He just put his arm round everybody, he just wanted everybody to feel wanted and feel loved and I think if you do that with players they’re going to give you their best.”