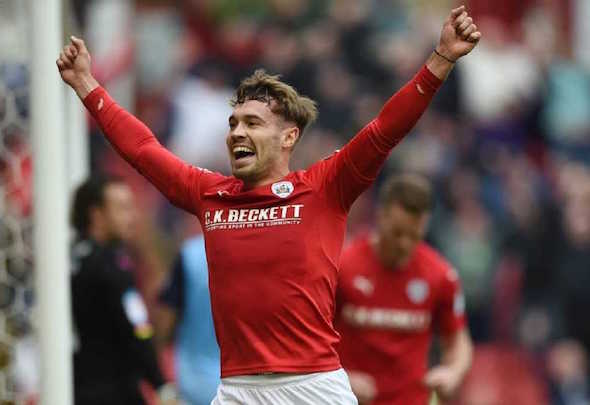 Barnsley are facing a battle to keep hold of top scorer Bradshaw this summer and they are resigned to losing the Wales international if they end up suffering relegation from the Championship.

Should Barnsley fail to secure Championship survival they will need to restructure their squad and with Bradshaw having just over a year to run on his contract at Oakwell they would be forced to consider offers for the 25-year-old.

Bradshaw, who joined Barnsley from Walsall in 2016, has scored 12 goals so far this season and has established himself in the Wales squad since his move to South Yorkshire.

A number of Barnsley’s Championship rivals are activley monitoring Bradshaw’s situation and are ready to make a move for him this summer.

Leeds are in the market for a new striker this summer as they have struggled for goals this season following the departure of Chris Wood last summer and Bradshaw is well known to current Whites boss Paul Heckingbottom.

Pierre-Michel Lasogga is unlikely to see his loan move from Hamburg become permanent and Bradshaw figures highly on Leeds’ wanted list to add to their attacking ranks.

Nottingham Forest are also seeking additional firepower next season after a disappointing campaign this term and they have been keeping tabs on Bradshaw.

Birmingham are the lowest goalscorers in the Championship this season Bradshaw is among their targets to boost their firepower next term.

Sunderland and Reading are long-term admirers of Bradshaw having tried to sign him in the January transfer window and they have continued to monitor his progress.