The Irons legend, speaking exclusively to Football Insider correspondent Dylan Childs, claimed that the 28-year-old looks to be a “fantastic signing” after a “big” display at the King Power Stadium.

Coufal started the game at right-wing back in the absence of the injured Ryan Fredericks and kept a clean sheet on his debut in a 3-0 victory for David Moyes’s side.

The club confirmed the capture of the Czech Republic international from Slavia Prague just two days before Sunday’s win.

He put pen to paper on a three-year deal at the London Stadium with the option of an extra two years.

When asked by Football Insider for his assessment of the full-back’s debut, McAvennie said: “I thought Coufal put in a big performance at Leicester.

“I felt sorry for him though. In his photograph he looked like a rabbit caught in headlights. It was brilliant!

“Listen, he can look however he likes because he put in a great performance.”

Speaking after Sunday’s win over the Foxes, Coufal said:”It was the perfect debut for me. 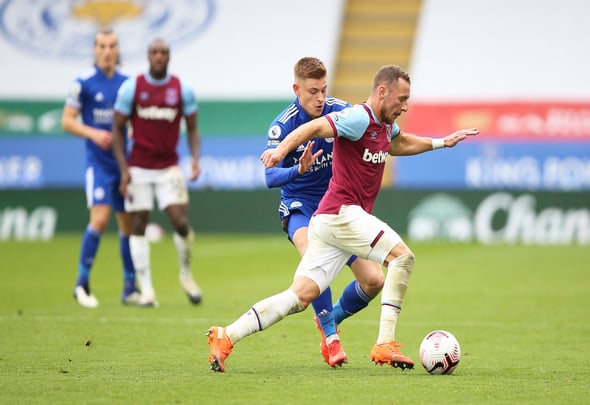 “Before the match I was a little nervous, but I must say thank you to all my teammates because they’ve supported me every day since I joined, and especially Tomas (Soucek).

“The level of football in the Premier League was as high as I expected. It was very fast and very hard, but now it’s a dream come true and perfect for me.”

In other West Ham news, Frank McAvennie thrilled by big update on 28-year-old.