Paul Robinson insisted the Newcastle United job will be one of the most coveted in the world as the manager will be handed an “outstanding transfer budget with exceptional wages”.

However, the former Spurs and Leeds United keeper, speaking exclusively to Football Insider correspondent Dylan Childs, hoped Steve Bruce would initially be given an opportunity after “exceeding expectations” this season.

As revealed by Football Insider, the prospective new owners plan to eventually install a “world-beater” into the manager’s post at St. James Park to attract top talent in upcoming transfer windows.

On Tuesday it emerged that the PCP Partners, a Saudi Arabia-backed consortium were in the process of purchasing the club from Mike Ashley in a £300million.

The Premier League is now ratifying the deal, a process that could take up to three weeks.

When asked by Football Insider if Rafa Benitez could be in line for a return to Tyneside, Robinson said: “The owners will have a plan of who they want to bring in down the line but it is unfair to talk about a job that is currently occupied by a man that has done extremely well this season and exceeded expectations.

“I would like to see him given an opportunity to prove his credentials with a big budget behind him.

“If they change it down the line there will be many suitors. Any manager that is promised a huge transfer kitty, no matter where the job is, it is a massively attractive one.

“At Newcastle, you are going to have an outstanding transfer budget with exceptional wages, a great stadium, a great fan base and an opportunity to make history by winning something – I do not care who you are, it is attractive.” 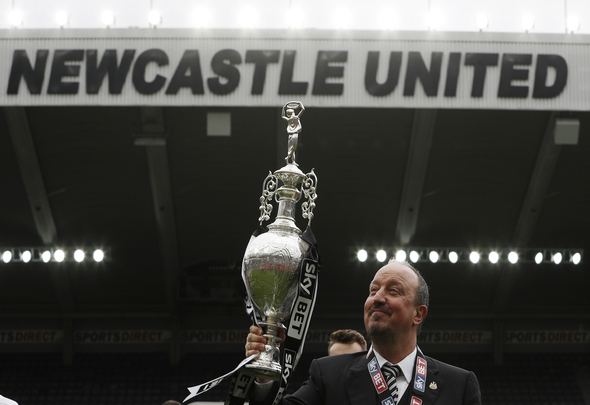 Benitez left the Magpies at the end of last season after becoming increasingly frustrated with the club’s lack of ambition under Ashley.

However, Football Insider has learned the prospective new owner would transform the club’s aspirations.

In other Newcastle United news, Danny Mills has told Football Insider the timing of the takeover is “bizarre” amid the Coronavirus pandemic.