Alan Hutton suggests there may have been a breakdown in the relationship between Jozo Simunovic and Celtic after the club chose not to extend his stay at Parkhead.

The former Scotland full-back, speaking exclusively to Football Insider assistant editor Russell Edge, admits it was “strange” that the Hoops made the decision not to extends the centre-back’s stay despite having the option to.

In their statement confirming the centre-back’s departure, the Bhoys confirmed that they had chosen not to trigger a year-long extension clause in the 25-year-old’s contract.

Best wishes to Jozo Simunovic and Jonny Hayes – thank you for all you've done for #CelticFC! 🙌🍀

Hutton admits that he was baffled the club chose not to keep Simunovic on for another year, suggesting that there may have been a breakdown of relationship behind the scenes.

“It’s a bit of a strange decision, that. I assume they didn’t want to take up the option,” Hutton told Football Insider.

“I don’t know if something’s happened, you don’t really know what’s going on behind the scenes but I thought when he played, he did well. He won things there and it just seems the relationship has broken down a little bit and both parties have gone their separate ways.

“I’m sure his agent will be working hard to find him a new club.” 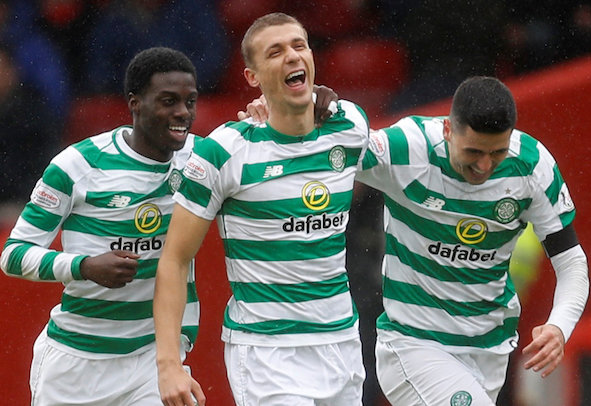 Simunovic leaves Celtic with 126 appearances under his belt, although only 16 of those came this season.

Having joined the club back in 2015, he played a key part in all of the Bhoys’ treble-winning campaigns.

In other Celtic news, it can be REVEALED the club have been handed a major boost in the hunt to sign their top target this summer.