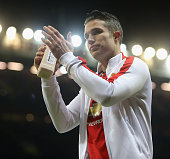 EXCLUSIVE | By Manchester correspondent Alex Stevens
Robin van Persie is willing to leave Manchester United this summer – but only if he is handed a ‘golden goodbye’ by the Premier League club.

The Dutchman will have a year remaining on his £250,000-a-week contract at the end of the season and United have not approached him to offer an extension.
Football Insider sources have learned that United would consider off-loading Van Persie, who turns 32 in August, and replacing him with a younger forward.
However, the Holland international knows he will not be able to command the same salary at another club and would only be willing to leave if he receives a big pay-off from United.
Football Insider understands that Van Persie would want a ‘golden goodbye’ of around £2m, which would enable him to get close to meeting the shortfall of the salary drop he would get at another club.
The £24m signing from Arsenal has missed United’s last six matches with an ankle injury and the team have thrived, winning five consecutive league matches.
Football Insider revealed on Sunday that Van Persie is expected to be sidelined for another month as he is still experiencing pain from the ankle problem he suffered in United’s 2-1 defeat to Swansea City on 21 February.
Manager Louis van Gaal has already ruled his fellow Dutchman out of the Manchester derby on 12 April and it is understood he is also set to miss the subsequent league trips to Chelsea and Everton.
Van Persie is targeting the home match against West Brom on 2 May for his comeback, by which time he could have missed nine matches.
Van Persie was the double-winning Player of the Year as he shot United to the Premier League title in his first season at Old Trafford but his goal return has diminished in the subsequent two campaigns, following up his haul of 30 goals in 2012-13 with 18 and 10.