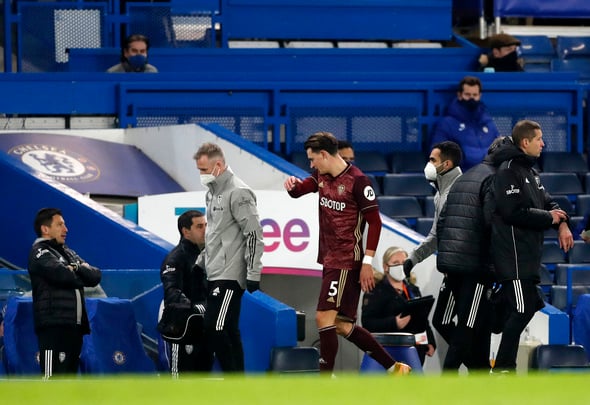 Noel Whelan has suggested Leeds United defender Robin Koch suffered a dead leg against Chelsea and will miss the visit of West Ham on Friday.

Speaking exclusively to Football Insider correspondent Dylan Childs, the former Whites striker and boyhood Elland Road fan called on Diego Llorente to stake a claim in Koch’s absence after he replaced the German at Stamford Bridge for his Leeds debut.

This site revealed last week Koch had missed multiple days of training and was a major doubt for the visit to Chelsea.

Marcelo Bielsa decided to start the 24-year-old but he only lasted eight minutes before being replaced by Llorente.

The Argentine did not disclose the nature of the injury after the game and insisted it was picked up during the game.

But Whelan has suggested he will be out for over a week with a dead leg.

“But on the other hand, we’ve got Llorente back so when we lose one we get one back. That’s the problem at the minute.

“We didn’t expect to see Llorente starting the game. There were doubts about whether Koch would make it or not but he was passed fit enough to play.

“It was that first challenge from Giroud who is physical in those areas. He got a knock that he couldn’t recover from.

“We don’t know the extent of the injury and how long he’s going to be. I’m told it was just a dead leg and he didn’t recover from that.

“If it is just a dead leg then you’re talking a week and a bit. So I doubt he’ll start against West Ham on Friday night, that’s a little too soon for him to recover from.

“Hopefully he won’t be too far off challenging again. It gives Llorente an opportunity to stake a claim.”