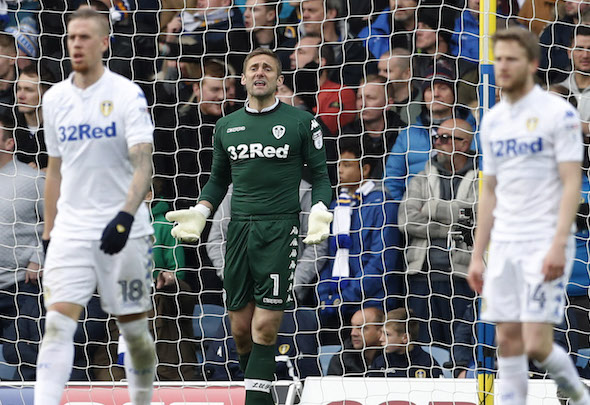 Leeds United veteran Robert Green is available for transfer this summer, according to a reliable journalist.

TalkSPORT reporter and commentator Ian Abrahams reports that the 37-year-old goalkeeper has been told by the Whites he can leave this summer.

After 1 Eng keeper moved club's today, my sources tell me a former one, @Robert1Green is available & can leave @LUFC pic.twitter.com/d6OloyTifM

.@LUFC fans, if I wasn't certain Robert Green was available for transfer from Leeds, I wouldn't have tweeted it pic.twitter.com/JjfsAeCkiO

Of course the other England goalkeeper Abrahams referred to is Joe Hart, as he completed a season-long loan move to West Ham on Tuesday.

Green was a mainstay between the sticks for the Yorkshire giants last term, making 47 appearances across all competitions.

He arrived at Elland Road last summer on a free from Queens Park Rangers, after previously spending time with West Ham and Norwich City in his lengthy club career.

The 37-year-old has been capped by England on 12 occasions, but he has not featured since the 1-0 friendly win over Norway in May 2012.

However, new Whites manager Thomas Christiansen has brought in former Werder Bremen shot-stopper Felix Wiedwald, and it appears he will be the club’s number one choice goalkeeper next season.

Given Green’s consistent performances last season Abrahams’ admission comes as a slight surprise, but given his elder statesman status it does not. Green is 37-years-old and surely does not have more than one or two seasons left in him, so in that regard it would be a wise decision by the Whites to offload him. Wiedwald has also come in, in the peak years of his career, so it would be foolish for Christiansen not to use him as his first-choice goalkeeper.

In other Leeds transfer news, this ace is being lined up by an Italian club.