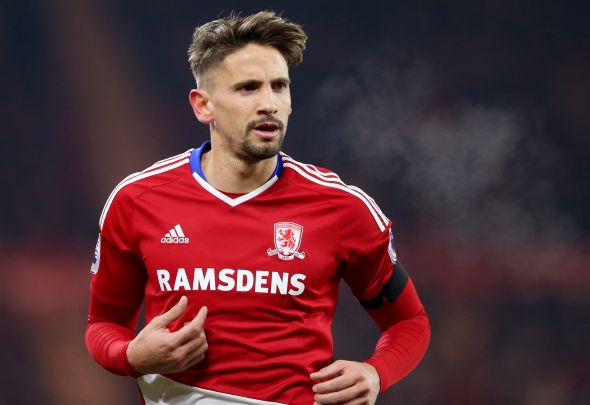 Liverpool are believed to be considering a shock move for Middlesbrough attacking-midfielder Gaston Ramirez, according to a report.

Italian news outlet Tuttomercato claim that the Reds have lined up the out-of-favour 26-year-old to bolster their attacking options for next season, and that they have already made informal contact with Middlesbrough over a potential deal.

The Uruguay international looked destined to leave the club last month, after handing in a transfer request in a bid to land a move to Premier League champions Leicester.

However, despite considerable time left in the transfer window to push through a deal, Ramirez did not get his transfer wish.

The Daily Mail reported on Wednesday that Ramirez has since returned to training with Middlesbrough in a bid to rebuild his reputation, but the new reported interest from Liverpool is likely to throw another spanner in the works.

Liverpool boss Jurgen Klopp is in the hunt for more attacking reinforcements, after witnessing his side struggle in the absence of star duo Philippe Coutinho and Sadio Mane in the new year.

The Reds have lost much of their potency in the attacking-third in recent weeks, and Klopp believes Ramirez could make a considerable difference.

The midfielder has made 17 appearances for Middlesbrough this season, contributing two goals and three assists.

Liverpool could perhaps do with one or two more reliable, more consistent attacking options for next season and beyond, but they could surely get a lot better than Ramirez. He is a capable Premier League player, having showcased his talents at Southampton before joining Middlesbrough, but he is not the calibre of player Liverpool will need to put their title ambitions back on track. If Liverpool can qualify for the Champions League next season, Jurgen Klopp and the club will still possess the pulling power to bring in talent much greater than Ramirez. He is a good player, but he is no better than the current crop at Anfield, and should be avoided at all costs.

In other Liverpool transfer news, the club may be prepared to sanction the departure of this defender in the summer if it means they can land this target.

We’ve launched an <<EXCLUSIVE TRANSFER WINDOW NEWS FEED>>. ‘Like Us’ on Facebook by clicking here if you want 24/7 updates on all Liverpool transfer news.