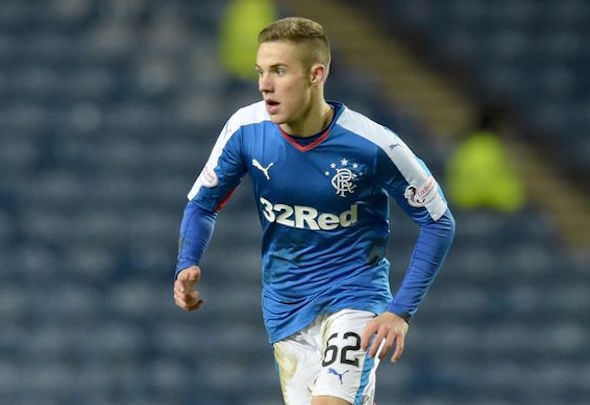 By Richard Parks
Rangers and Dumbarton fans took to Twitter to hail Liam Burt’s emergency transfer as a great move for all parties.
Dumbarton revealed on their official Twitter account and website on Friday night that Burt, 19, has signed on a 28-day deal due to an injury crisis at the second-tier club.

The attacking midfielder made his Rangers first team debut in March 2016 when they were in Scotland’s second tier and he has made two further appearances for the senior side.
But the teenager has failed to get a look-in this season and has slipped further down the pecking order following a January signing blitz.
Dumbarton fans hailed the arrival of Burt as a “great signing” who “will score goals”, while Rangers fans praised his attitude and work ethic on social media.
Here is a selection of their messages on Twitter:

Free from injury hopefully can kick on,good loan deal for the lad.

Dumbarton manager Stevie Aitken has secured the second out-of-window loan signing of a Rangers player this month after sealing a deal for versatile defender Aiden Wilson, who can play at centre-back or right-back, last week.
Former Rangers coach Ian Durrant, who is Aitken’s number two, is said to be a big admirer of Burt, who has represented Scotland at international level from Under-16s through to Under-21s.
Burt joins Dumbarton as they sit ninth in the Championship and will be available to make his debut against Welsh side TNS in tonight’s Irn-Bru Cup semi-final.
In other Rangers news, a stunning £50,000-a-week deal is on offer to a Light Blues first teamer in game-changing development.
Don’t miss out on breaking and exclusive Rangers news by clicking here for our brilliant 24/7 updates on Facebook, Instagram and YouTube.