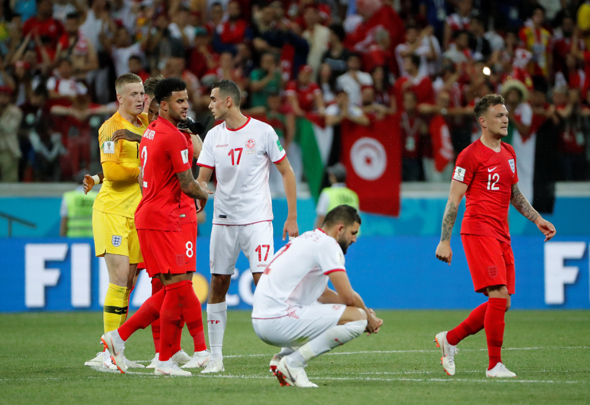 England kicked off their 2018 World Cup campaign with a deserved win, although they left it late to secure the win with a Harry Kane header at the death.

They should have been out of sight way before this in all honesty, after spurning a host of clear-cut chances in the first-half.

There were a number of standout performances in England shirts in the first 45 but Kieran Trippier was brilliant, bombing up the right flank and delivering brilliant crosses.

His display didn’t go unnoticed by England fans, who flocked onto Twitter to heap praise onto him.

He made the squad after Kyle Walker, a former Spurs player, was moved into the centre by Gareth Southgate.

And it was Walker who gave the penalty away that gave Tunisia an unexpected lifeline in the game after an early Kane goal had put England ahead.

In the end though, justice was done and England fans around the globe breathed a sigh of relief.

Meanwhile, Trippier was getting plaudits on Twitter for a fantastic display that bodes well for England for the rest of the tournament.

Here are the best reactions to Trippier’s game against Tunisia:

It’s extraordinary when you think about how much Trippier has improved under Poch. Used to play for a relegation battling Burnley now he’s putting in a MOTM performance at the World Cup.

Trippier of Lingard for me, Kane didn’t actually play that well

Henderson was ok but not brilliant. Trippier MOTM

I thought Trippier was best player on the pitch

Totally agree about Trippier, he was excellent, definitely should have been a penalty on Kane twice though

Trippier was best on pitch for me .
All of his whipped in crosses was class

From BBC website:
‘England's Kieran Trippier created six goalscoring opportunities, more than any other player has managed in the tournament.’
I thought Trips had an excellent match, it was a toss up between him and Kane for MOTM#WorldCup#bbcworldcup #ThreeLions #ENG #England

Agree with you @philmcnulty. Trippier only going to get better. Thought his anticipation and delivery were quality…and I’m no Spurs fan.

In other Tottenham news, Spurs ramp up pursuit of Colombian international with £14.5m release clause