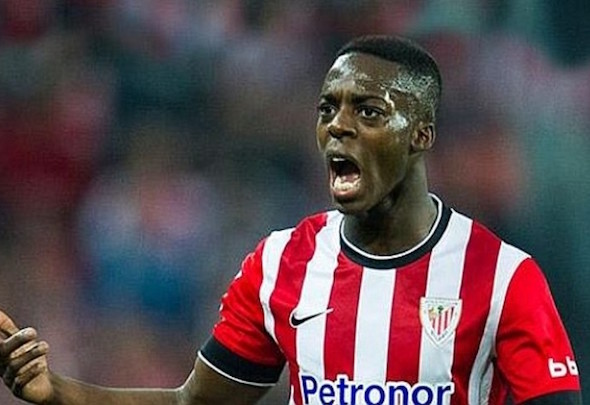 Arsenal and Liverpool will have to pay £38million to land jet-heeled Athletic Bilbao winger Inaki Williams.

The Spain Under-21 international signed a contract extension with his club on Thursday that runs until 2021 and increases his release clause from £15.3million.

It is a blow to the two Premier League giants, who have sent scouts to watch Williams in recent weeks as they assess whether to bid for him.

Tottenham have also been closely watching Williams, who has been timed as the fastest player in La Liga.

Williams broke the record in Spain last season after being clocked at an astonishing 22.2 miles per hour during a 1-1 draw with Deportivo La Coruna in May.

A Spain source has told Football Insider that Arsenal and Liverpool were not looking to buy Williams this month but he was under consideration for the summer.

The 21-year-old has now committed his future to Bilbao and, crucially, increased his release clause by £23million, which is likely to prove prohibitive to most clubs.

Williams became the first black player to score in Bilbao’s 117-year history after netting against Torino last February and has emerged as a fans’ favourite.

Bilbao-born Williams, the son of a Ghanaian father and Liberian mother, has scored six times in 15 Spanish league matches this season, and 10 in 24 appearances in all competitions.

The winger can play anywhere across the front three and has been used as a central striker for Spain Under-21s but is predominantly used on the right wing by his club.