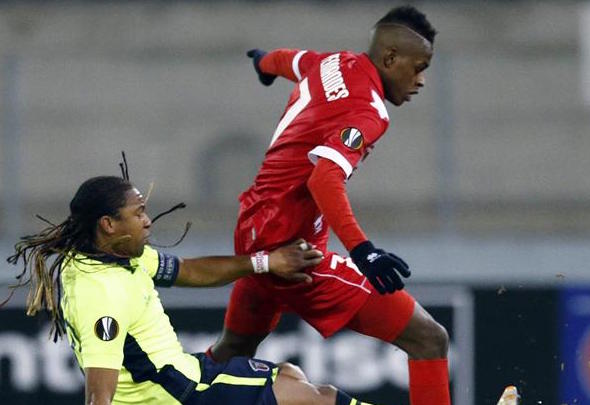 West Ham are close to signing midfielder Edimilson Fernandes from Swiss club Sion for a fee of around £5.5million, according to a report.

The Guardian claim Fernandes is set to travel to London on Wednesday to undergo a medical with the Premier League club.

It is said that West Ham have had a bid accepted for the 20-year-old midfielder, who is expected to sign a four-year contract with the club in the coming days.

Fernandes, who is a cousin of the former Manchester City player Gélson Fernandes, is a product of Sion’s youth system and made 26 appearances in the Swiss Super league last season, scoring one goal.
The Switzerland Under-21 international also started the Europa League group stage tie against Liverpool last October, which ended in a 1-1 draw.

Slaven Bilic has been searching for midfield reinforcements for his squad with AC Milan also showing an interest in Pedro Obiang this week.

Italian news outlet Tuttosport claims that the Serie A giants are keen on the 24-year-old as an alternative to former Tottenham midfielder Benjamin Stambouli, who is also under a bid from Bundesliga side Schalke.

It is said that West Ham have informed Milan they will only allow Obiang to leave permanently and they want a £5.1million straight cash deal.

The former Spain Under-21 international has also attracted interest from Torino and Fiorentina.

The Spaniard only joined the Hammers last summer and made 30 appearances for the club last campaign, but 14 of the appearances came off of the bench.

The combative midfielder was also brought on as a substitute in Sunday’s 1-0 victory over Bournemouth in the 89th minute.

However, he has started both times in West Ham’s two European away trips of the new campaign against NK Domzale and Astra Giurgiu, as Bilic looks to rotate his squad between the Premier League and the European competition.

As well as Nordtveit, West Ham’s number 14 is currently behind the likes of captain Mark Noble, Cheikhou Kouyate, and wonderkid Reece Oxford.

Manager Slaven Bilic has been very busy this window, bringing in no less than nine new recruits as his side hope for a Europa League run as well as a successful Premier League campaign.