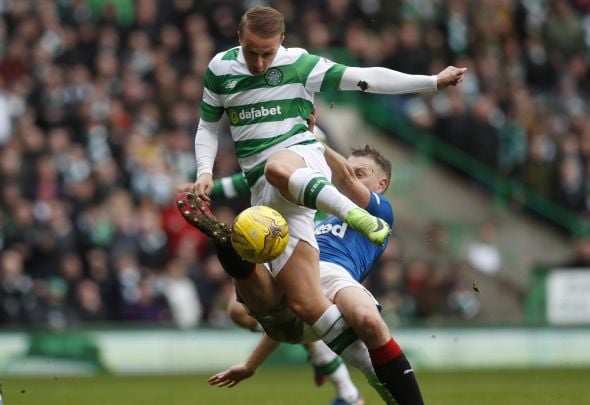 Craig Beattie has claimed that Leigh Griffiths’ finishing “is a joke” because of how good it is.

The former Hoops striker also thinks that the 26-year-old should be given the nod to start by Gordon Strachan when Scotland welcome England to Hampden Park in a World Cup qualifier on Saturday.

Chris Martin is expected to lead the line after his recent goalscoring exploits at international level, but Beattie is adamant that Celtic attacker Griffiths is the best option.

“I know Chris nicked the winner in the last game,” said Beattie, as quoted by the Scottish Sun.

“He’s got different assets but Leigh can stretch defences.

“He will run the channels and work hard. I’ve been up to Lennoxtown and watched him training and his finishing is a joke. He’s as close as I’ve seen in my career to Kevin Phillips.”

Griffiths was in hot form for Celtic at the end of the season as he stepped in Brendan Rodgers’ first-team plans due to an injury to Moussa Dembele.

The Scot scored four goals and supplied five assists in the final five league games to help the Bhoys preserve their unbeaten run in all domestic competitions.

However Griffiths’ record with the Scottish national side is nowhere near as good.

In 12 appearances for the Tartan Army, the 26-year-old is yet to find the back of the net, despite him scoring 18 goals in 38 appearances across all competitions at club level this term.

Beattie, 33, began his career with Celtic before moving south of the border to West Brom in 2007 where he helped them win the Championship title later that year.

He went on to have spells at Swansea, Hearts and Dundee before ending up at his current side Edinburgh City.

In other Celtic news, the Hoops are in a three-way battle for this Premier League defender.