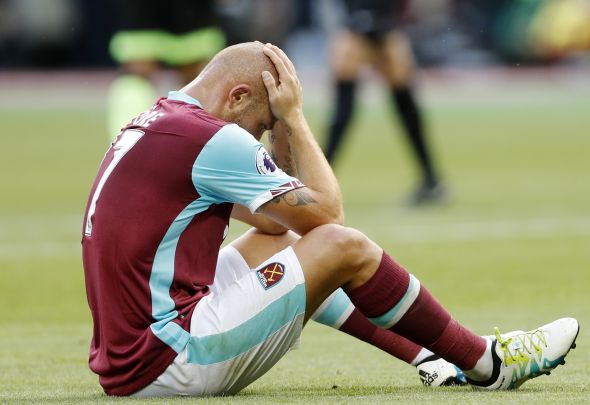 West Ham’s transfer policy this season has come under intense scrutiny from fans and pundits alike as a number of new recruits have struggled in claret and blue.

Slaven Bilic opted to target overseas talent in the summer, bringing in eight new players from foreign clubs as well as tying last season’s loan star Manuel Lanzini down on a permanent basis.

However, a handful of his foreign stars have flopped and could end their stay at the London Stadium this summer, while a number of the current playing squad are also expected to leave.

Here are five players that should be axed by Bilic:

Brought in from Champions League winners Real Madrid on a 12-month contract, Spain international Arbeloa was seen as cover for Sam Byram at right-back.

However, the former Liverpool veteran has struggled with injury, making just four appearances in all competitions and is now set to leave when his contract finishes.

Currently on a season-long loan from Turkish outfit Besiktas, Tore has plummeted down the pecking order after a number of mediocre performances for the east London side.

Currently on loan from second tier Uruguayan outfit Deportivo Maldonado, Calleri has failed to adapt to the rigours of England’s top flight with just one deflected strike in 12 appearances.

With Andy Carroll preferred up front and attacking duo Andre Ayew and Diafra Sakho soon to return, Calleri is likely to join Tore in failing to earn a permanent stay in east London.

Despite being a loyal servant to the Hammers since his move from Spanish outfit Real Betis in 2013, Adrian is now likely to leave in the summer with less than six months on his current deal.

Now back-up stopper to Darren Randolph, contract talks do not seem to be on the horizon for the 30-year-old with Bilic potentially eyeing a summer move for a new goalkeeper.

Young striker Fletcher has been reportedly interesting Championship outfit Leeds United throughout the season, after his move from Manchester United in the summer.

Although a move to Elland Road failed to materialise, Fletcher has struggled to break past the Hammers’ first-team strikers and should be loaned out by Bilic ahead of the 2017-18 campaign.

In other West Ham transfer news, this versatile Premier League champion could be brought in to bolster the Hammers’ defensive ranks.