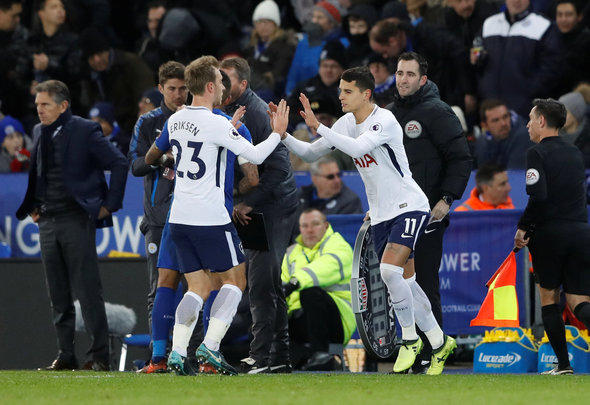 Tottenham fans will have spent the last 48 hours wondering just who is going to step up to the plate in the absence of star striker Harry Kane for the FA Cup clash v Swansea.

The 24-year-old striker is ruled out of the match after picking up an ankle injury in the 4-1 win against Bournemouth, leaving question marks over who takes his place on Saturday.

The natural option, and the only other recognised centre forward in the squad, would be Fernando Llorente, but he has failed to live up to expectation, and in what is a crunch clash for Spurs’ hopes of silverware, it may be Mauricio Pochettino does not want to leave anything up to chance.

The London Evening Standard claim that it will be Erik Lamela who takes Kane’s place in the side, with Heung-min Son moving from a wing role to the central striker’s position, which is a fair shout considering the impressive form the South Korean international has shown in front of goal.

However, instead of the Argentine winger, it must be January arrival Lucas Moura who starts against the Swans, with fans dying to see his dazzling wing displays after being used sparingly since his move from PSG.

The 25-year-old has only managed to make five appearances for the Lilywhites but has already had a hand in three goals, scoring once and chipping in with two assists, and after being left on the bench against the Cherries, the cup outing is his time to shine.

If Pochettino does trust Lamela more, and Kane is out for beyond the three week gap between league matches, then the Argentinian winger must surely be saved for the Premier League, leaving Lucas as the top choice for Saturday’s showdown.

With his two starts already coming in the FA Cup, it is about time he made it three, and give the supporters the show they deserve at the Liberty Stadium.

In other Tottenham news, this big money revelation proves that Tottenham have secured the signing of the season.