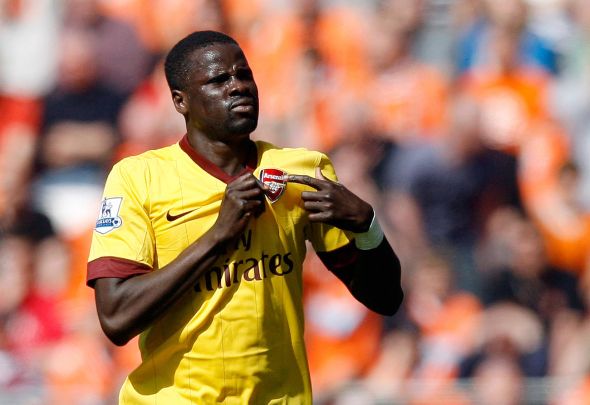 Former Arsenal defender Emmanuel Eboue is in talks to sign for Indian Super League side Atletico de Kolkata, according to a report.

The 33-year-old has been without a club following a short spell at Premier League club Sunderland, which lasted just 22 days due to a year-long European ban enforced on March 31.

African outlet Afrik Foot claim Eboue is closing in on a deal to play in the newly formed Indian Super League, as he looks to continue his playing career despite the ban which was given after Eboue failed to pay an agent.

“Emmanuel Eboue is a great player who has long happiness Arsenal,” Molina said, as quoted by Afrik Foot. “He is someone who can bring us a lot. We hope to reach an agreement with him.”

Eboue spent six years at Arsenal from 2005 to 2011, making 214 appearances in total, before joining Galatasaray for £2.5million.

The right-back was constantly in the spot-light during his time with the North London club.

A low-point came after he was hauled off by manager Arsene Wenger during a match against Wigan, despite being subbed on. He was booed by the Gunners’ fans throughout the match.

In other Arsenal news, this transfer target trained by himself as he awaits a green light to complete a move to North London.