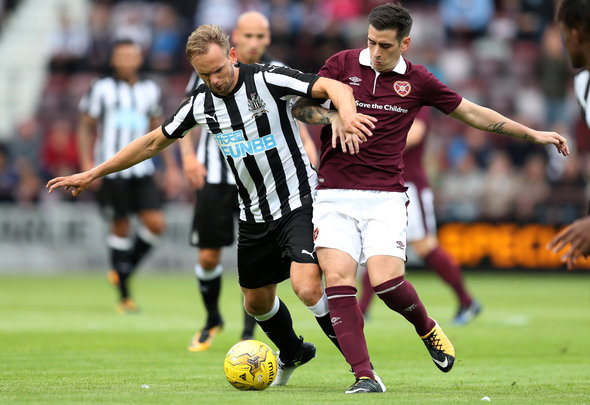 When Rafael Benitez gave the green light to see Siem De Jong return to Dutch giants Ajax over the summer Newcastle United supporters would have been firmly backing the decision.

The Dutch playmaker endured a difficult three years on Tyneside, as he suffered numerous injuries both on and off the pitch.

A collapsed lung and a freak eye injury suffered on the training pitch were just two incidents which ruled the now 28-year-old out of action for prolonged periods.

It resulted in him making a mere 26 appearances for the club, scoring twice and providing a solitary assist, and having played no part in the club’s Championship campaign it was no surprise to see him depart.

However, with seven matches gone in the Premier League this season, it appears that the reported £4million transfer might have been a mistake.

It has been evident that aside from winger Matt Ritchie, the club have been lacking the creativity needed to dissect the opposition and force their way into goal scoring opportunities.

That responsibility in most sides will fall to the playmaker, who links the midfield and attack and dictates play in the attacking third.

However, Benitez is severely lacking in that department.

His first choice this season has been Ayoze Perez, but for all his enthusiasm and drive, he has contributed very little, while Mo Diame obviously has not proven his worth as he continues to find himself named on the bench.

In their recent 1-1 draw against Liverpool the Magpies had to rely on the returning Jonjo Shelvey to split to Reds’ defence open with a sublime pass for Joselu to net the equaliser.

In fact it is Shelvey who is perhaps the closest fit to what the Magpies need, but playing in a deeper role suits his style of play.

De Jong, who put in a series of impressive performances in the club’s pre-season fixtures, would have offered the composure and quality up front to bring the best out of those around him, much more than Perez, who has been shoehorned into an unfamiliar role.

It would be no surprise if Benitez looks to snap up another attacking midfielder in the January transfer window, but he may well be ruing his decision to offload what he needed.

In other Newcastle United news, this former mainstay’s time at the club is coming to an end.