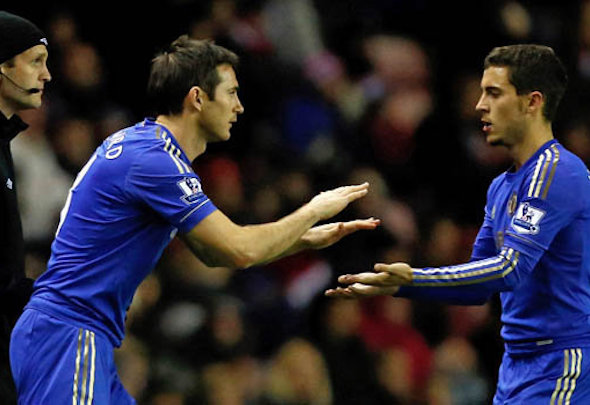 By Coral Barry
Frank Lampard has revealed that he is unconvinced by a report that a Chelsea player would “rather lose than win for Jose Mourinho”.
The astonishing claim was made by BBC Radio 5 Live presenter Garry Richardson, who said yesterday one first-teamer had spoken of preferring defeat to a Mourinho-managed victory.
Speaking on Sky Sports’ Monday Night Football programme, Lampard said today: “The problem is when you have a hard time, these stories become bigger, but I don’t think those words would have been spoken.
“It’s nonsense if it is happening. I don’t believe it is. I don’t think players at the top level will down tools. The first responsibility we all had as players was to yourself. When you go on that pitch, if you’re downing tools the only one that looks stupid first and foremost is yourself.
“So they’re playing for Chelsea now. Chelsea is a huge club, one of the biggest clubs in world football. They have to try and produce.
“This is not a great moment for them to go play and flick it round the corner, this is a moment for players to knuckle down and go and win games maybe the hard way.”
Speaking on Sunday morning, Sportsweek’s Richardson said: “Let me tell you what I know on the Chelsea story. My information comes from a Chelsea first team player.

“The information was actually passed to me by a football contact. I was told that Jose Mourinho’s relationship with many of his players is at rock bottom.

“Here’s a staggering quote. One player said recently, ‘I’d rather lose than win for him’. Now that last quote may well have been said in the heat of the moment, but it perhaps gives an insight into the mood of some of the players.”