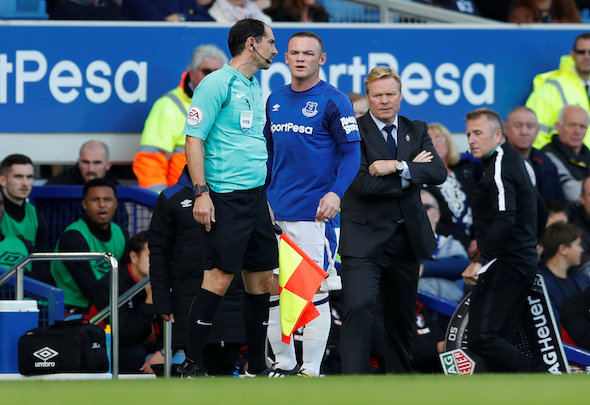 Wayne Rooney has revealed he won’t give up taking penalties at Everton despite missing them, even though he now enjoys his new role of playing deeper.

In an interview with the Daily Post, the Toffees striker revealed he was always going to take the second penalty against Swansea City on Monday even though he missed the first.

“I was frustrated to miss the first one,” admitted Rooney.

“If you’ve noticed the two penalties I’ve missed we scored the rebound because I’ve put a bit of topspin on the ball knowing if I miss it will come back and we’ll score.

“I was never going to give that second penalty up.”

Rooney’s first penalty was saved by Łukasz Fabiański in the game against Swansea, but Dominic Calvert-Lewin tapped home the rebound.

The Toffees then won another penalty in the 73rd minute which Rooney converted, striking the ball into the corner of the goal.

Everton were 3-1 winners against Swansea City, with Gylfi Sigurdsson grabbing the Toffees’ other goal, and moved to ninth in the league.

Rooney despite being reluctant to give up penalties, did reveal he’s enjoying playing deeper on the pitch for his side.

The striker believed it was the right move during this stage of his career and that he was able top pick his moments of when to break into the box.

Rooney has scored 10 goals in 16 Premier League appearances for Everton this season, after joining from Manchester United in the summer.

However, the striker has only grabbed one goal in 8 appearances in other competitions for Toffees, scoring in the Europa League.

In other Everton news, Allardyce revealed how many players the club will sign in January.