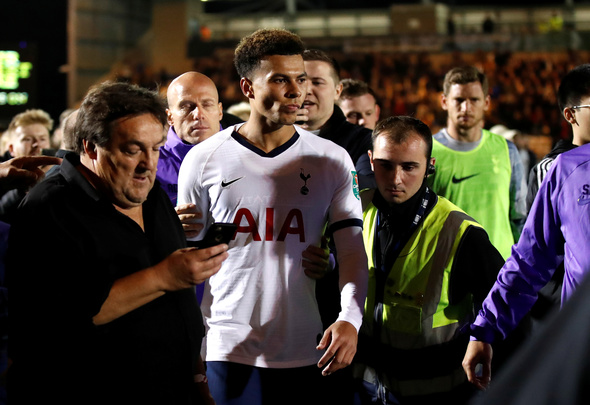 Danny Mills has defended Tottenham midfielder Dele Alli after coming under fire this season and says people need to be patient with the England international.

Speaking exclusively to Football Insider assistant editor Russell Edge, the former Manchester City and England full-back says that the 23-year-old might not have hit the heights of previous seasons but that he has had to deal with injury problems which take time to bounce back from.

The attacking midfielder has played 10 times across all competitions for Mauricio Pochettino’s side this campaign, a hamstring injury at the start of the season another problem to add to a growing list of setbacks in recent years.

Having seen the 37-cap star come under increasingly heavy pressure from those in the stands, Mills has launched a staunch defence and says that it will take time for Alli to reach his former heights.

Mills told Football Insider: “He has to expect with everything going on in his personal life and everything else going on around him and injuries as well – he hasn’t been 100 per cent fit for some time – he’s going to have a dip in form.

“You’ve got to be a little bit patient with Dele Alli, he’s undoubtedly a fantastic talent, a very, very good player but all those reasons; injury, personal issues, the team not playing particularly well – fans need to give him a break.

“He just needs to get back to that consistency of playing week in, week out and get that fitness level back to 100 per cent.”

Alli’s 10 appearances have resulted in two goals and a single assist across all competitions so far this campaign, his latest outing seeing him play 72 minutes against Sheffield United in a 1-1 draw.

He has a total of 194 games under his belt for Spurs since joining from MK Dons.

In other Tottenham news, Paul Robinson has ripped into one Spurs star he was “surprised” to see line up against Sheffield United.