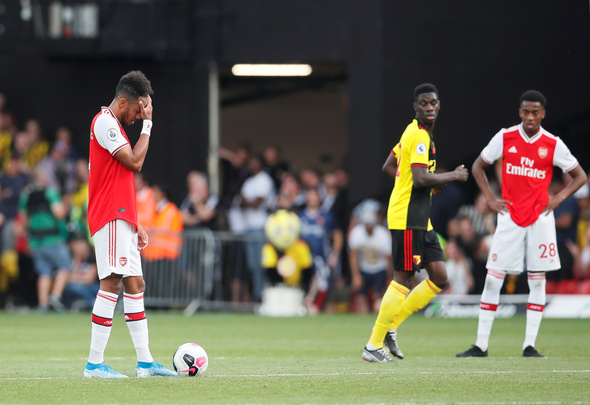 Darren Bent has joked that Arsenal are going to turn into Premier League rivals Everton after seeing the Gunners let a two-goal lead slip against Watford on Sunday.

Speaking exclusively to Football Insider assistant editor Russell Edge, the former Spurs striker and boyhood supporter of the Gunners tore into the defensive unit at the Emirates Stadium, insisting they look like four individuals rather than a collective at the back.

Unai Emery lined up with David Luiz, Sokratis, Sead Kolasinac and Ainsley Maitland-Niles against the Hornets, with the centre-backs coming under heavy fire for their shaky performance.

Bent says that the quartet are not living up to standards now and says they are much like Everton, who have conceded at least two goals in their last four games across all competitions.

Bent told Football Insider: “They’re playing more like four individuals than they are as a collective unit. They’re just not working in tandem, they’re all over the place.

“You’ve got some that are trying to play offsides, you’ve got ones that aren’t attacking crosses, one will try win the header, the other’s not covering.

“You can’t be exciting going forward and concede as many goals as they do because you’re going to get nowhere. They’re going to turn into Everton. What they’ve got over Everton is that they can score more goals than Everton so it gets them out of jail. They can’t be shipping goals left, right and centre.”

Arsenal have kept just one clean sheet in their opening five games, keeping top-flight strugglers Newcastle at bay, with Burnley, Liverpool, Tottenham and Watford all finding the back of the net.

Having beaten the Magpies and the Clarets, Emery’s men have gone three games without victory, losing to the Reds and drawing 2-2 against both the Lilywhites and the Hornets.

In other Arsenal news, Bent has admitted to Football Insider that he shocked himself with his reaction to one behind-the-scenes sighting.