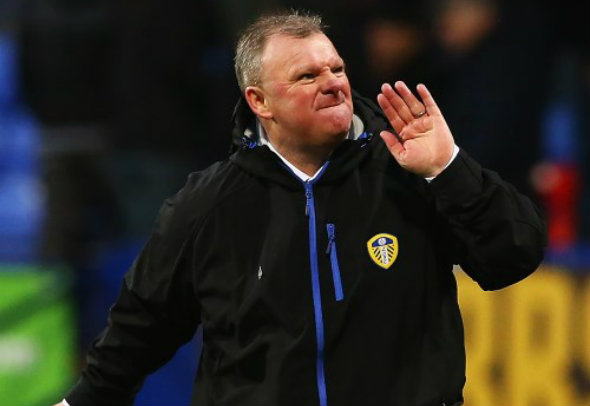 Eddie Gray has claimed that Steve Evans could stay on as Leeds manager next season.

Evans is waiting to find out his fate amid growing expectations that controversial owner Massimo Cellino will sack him.

A key board meeting called by Cellino for Wednesday seemingly set to decide on the manager’s situation was delayed by 24 hours until Thursday.

Evans is contracted to the Championship’s biggest club until the end of June and Cellino has fuelled the feeling that the Scot will become the sixth manager of his two-year reign to be axed.

The Italian has spoken freely of his attempts to persuade an elite manager to take on the task of steering Leeds back to the top flight and a place in the Champions League.

However, Leeds legend Gray has made the surprise claim that Evans could remain in the dugout next season.

Speaking to Radio Yorkshire on Wednesday night, Gray said: “The longer it goes, the more it leads me to believe he’s going to be here. I think he’s done well.

“If he gets the opportunity, I think he’d have a go. Look at his track record over the years, he’s done well, although I still don’t think performances have been great.

“If the president decides he’s going with Steve, he’s got to do it now. Give him the players he thinks can win the Championship.

“Some of the players coming into the football club have not been good enough. If not and somebody else comes in, they have got to have the same freedom. Massimo has got to make his mind up.”

Cellino implied that he would rule on Evans’ position after a board meeting, telling the Mirror at the start of last week: “I’m calling a board meeting for May 18 to plan for next season. I hope to have more time to plan football issues instead of lawyers and the Football League issue.”

Cellino was freed from the threat of an imminent 223-day Football League ban last week when the Court of Appeal in Italy overturned his most recent tax conviction but his status as Leeds owner is under renewed threat from the Football Association after the governing body charged him and the club with making an illegal payment of £185,000 during Ross McCormack’s transfer to Fulham in 2014.

Cellino said last Friday that he was considering selling the club due to the pressure on him from the authorities and sections of the Yorkshire club’s support.

In other Leeds news, Evans has given some insight into the club’s summer transfer plans.