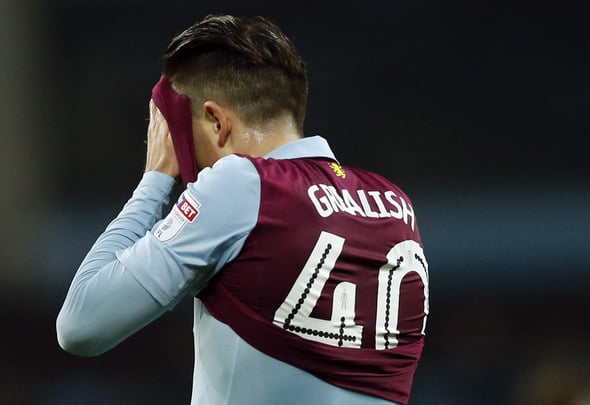 By Richard Parks
Aston Villa are keen to tie in-form attacker Jack Grealish to a bumper new contract in the the summer if they win promotion, according to a report.
The Mirror claim that talks over a new deal for the academy graduate, 22, have been delayed until the end of the season.
It is said that Villa are hopeful of securing promotion back to the Premier League and agreeing a new long-term contract with Grealish.
The Mirror report that the attacking midfielder’s current £20,000-a-week deal runs until the summer of 2020.
Grealish underwent an operation to repair a cut kidney at the start of the season following a freak collision with Tom Cleverley
The fans favourite returned to action in November and has steadily got up to speed to the point where he is playing some of the best football of his career under the stable Steve Bruce regime.
Grealish underlined his importance to the Championship giants with a virtuoso performance during their 2-0 Second City Derby win over Birmingham at the weekend.
It was the player’s first goal of the season but he has been influential in attacking areas through supplying six assists, three of which have come in the last six matches.
In other Aston Villa news, a key player at the club has refused to commit his future to Steve Bruce’s side after a shocking clause revealed.