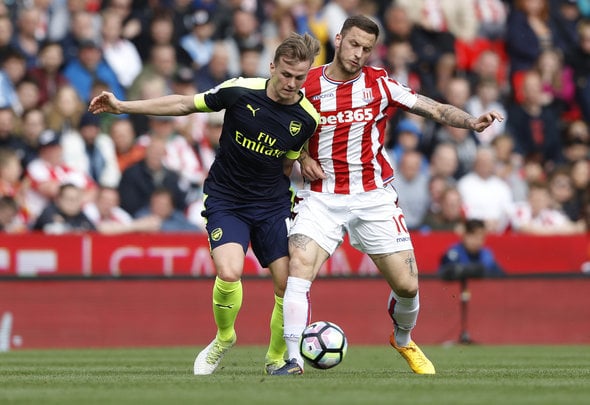 West Ham manager Slaven Bilic has revealed his delight with the signing of attacker Marko Arnautovic from Stoke.

The Hammers confirmed on Saturday that the 28-year-old has moved to the London Stadium and has become the club’s third signing of the summer.

He has joined Pablo Zabaleta and Joe Hart in making the switch to West Ham and has ended his four-year stay at Stoke in the process.

Arnautovic predominately plays on the left wing and is renowned for his trickery and strength.

The Austria international became an influential figure at the Britannia Stadium, but has now moved to another Premier League side.

Bilic hailed the capture of Arnautovic and feel he is currently in the peak of his career.

“It’s a great thing for the club,” Bilic said, as quoted by the club’s official website. “It’s a big signing – he is a massive player who knows the league, which is very important.

“He is in his best age, he is very motivated and I know him very well. He is a top player and he can play all across the front line, so he is a great signing for the club.”

Arnautovic arrived in English football in 2013 and made 145 appearances for Stoke.

His versatility means that he can also play as a central striker and that could be something that Bilic looks to exploit in the new season.

In other West Ham news, David Gold has revealed why the club’s youngster has not featured in pre-season.