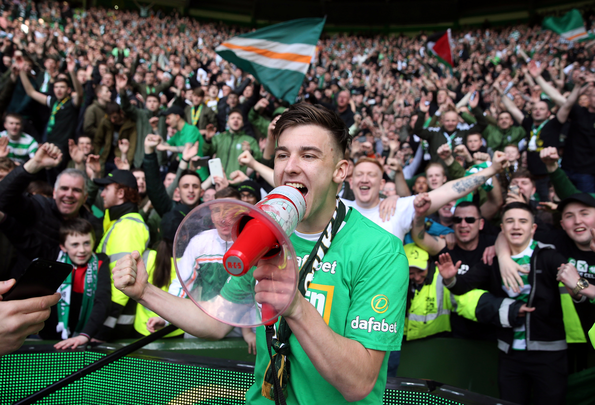 Celtic fans are used to seeing their players linked with other teams, and standout left-back Kieran Tierney is no exception to that rule.

The 21-year-old has just completed another excellent season for the Hoops, and last season was linked with a move to Manchester United, with ESPN reporting that the Hoops expected Jose Mourinho’s side to make a bid for the left-back in the summer.

However, plans may have changed, as the Daily Mirror have reported that Mourinho is not intending to make any left-back signings in the summer.

Whilst of course Mourinho may change his mind, this is undoubtedly good news for Hoops fans, who would not have been looking forward to a summer of transfer speculation about one of their best players.

Other teams might be interested in Tierney, but the interested from Manchester United did seem to be the most concrete, but their pursuit of the Scotland international seems to be over for now.

There is little doubt that some day a team will come in with a huge offer for Tierney, and the Hoops will then have a major decision to make.

But for now, Tierney can just get on with playing football, and helping his beloved Hoops to qualify for the Champions League group stages for the third season in a row.

In other Celtic news, the Hoops should swoop for a winger that might be on a free transfer