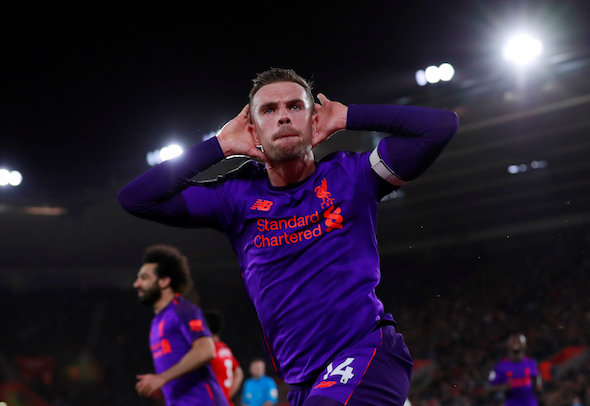 Pundit Noel Whelan has hailed Jordan Henderson for proving him wrong after his sparkling cameo for Liverpool in their Friday night win over Southampton.

Henderson came off the bench with the score at 1-1 and made a huge impact, setting up Mohamed Salah for the brilliant solo goal that put the visitors ahead and then sealing a 3-1 win with his first league goal of the campaign.

The Liverpool skipper subsequently defended his attacking record, insisting he is usually deployed in a deep role by Jurgen Klopp, amid criticism from many fans that he does not offer enough going forward.

Speaking exclusively to Football Insider, BBC Sport pundit Whelan explained why he has been so impressed by Henderson even though he is no longer a nailed-on starter in Klopp’s side.

“It’s not set in stone that he starts anymore, with Fabinho brought in to play the midfield anchorman role and he has looked so impressive in recent months,” Whelan said. “But Henderson is the captain and a key member of the side.

“He came on with a point to prove against Southampton and his desire and energy was clear to see. He made a really big difference along with [James] Milner.

“I can see why some people might criticise Henderson, but his job is normally to close down space, win the ball, and give it to the attackers or the full-backs.

“To be honest, he’s been a far better player for Liverpool than I thought he would be. I thought £20million was an awful lot when he was signed from Sunderland. But he’s proved me wrong and I’m amazed how good he’s become, really. He’s a key man.”

Henderson, 28, has made 314 appearances for the Merseyside giants since joining from boyhood club Sunderland in the summer of 2011 when Kenny Dalglish was manager.

He has played in 34 matches this season but his 27 league games have included 11 substitute appearances amid growing competition for midfield places.