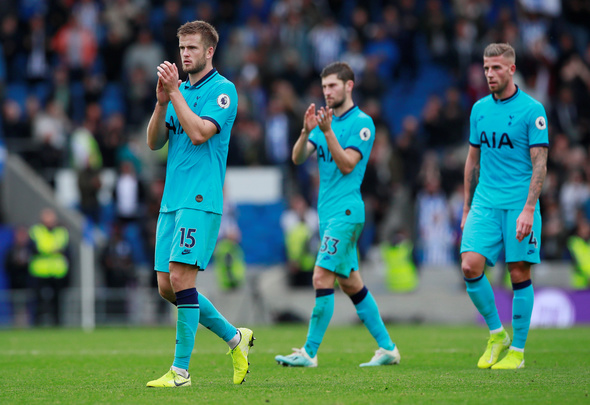 Darren Bent has suggested that Tottenham midfielder Eric Dier needs to leave the club for the good of his career after tumbling down the pecking order in north London.

The former Spurs and England striker, speaking exclusively to Football Insider assistant editor Russell Edge, says that the versatile enforcer, who has played a fair number of games as a centre back, is not going to get his career back on track by sitting on the bench under Mauricio Pochettino.

The 25-year-old has played just three times this season, including starting the shock League Cup defeat to Colchester and their disappointing 3-0 loss to Brighton in their last outing.

With a number of other options ahead of him in the first-team reckoning, Bent says that Dier needs to be looking for a move away if he wants to further himself and his career over the coming years.

Bent told Football Insider: “First and foremost, if he’s not going to play much – you think a couple years back, he was one of their main men. It’s like they had to get him on the pitch somewhere, whether it was centre midfield or centre back.

“If he wants to continue his development, he’s out the England squad again, a couple years back he was one of their main men – he needs to go somewhere and play consistent football.

Dier has 213 appearances under his belt for the north London heavyweights after joining from Portuguese side Sporting CP, while he has also managed to add 40 England caps to his tally.

Spurs’ next game sees them take on a struggling Watford side, the Hornets currently sat at the bottom of the table.

In other Tottenham news, Danny Mills has suggested that one senior star is facing the axe for a player who has been barely seen this season.