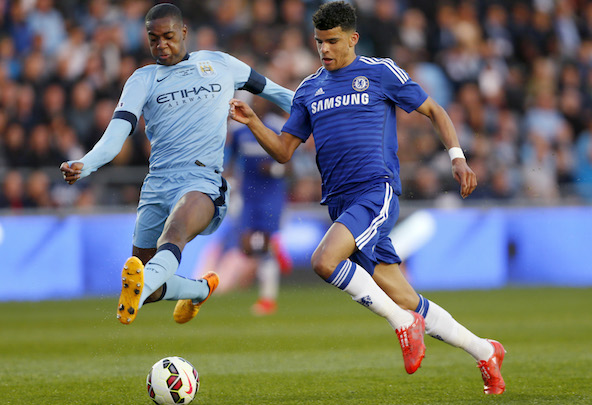 Manager Brendan Rodgers has admitted that he’s a fan of Chelsea striker Dominic Solanke without giving too much away after being questioned about Celtic’s reported interest in the player.

Scottish news outlet the Daily Record claimed earlier in the week that the Glasgow club had moved into pole position for the 19-year-old forward who has rejected a new contract with Antonio Conte’s team.

Rodgers had previously worked with the teenager while the pair were at Chelsea together and the former Liverpool manager has also told that he was responsible for taking Basingstoke-born Solanke to the Blues after he left Reading.

But, Rodgers remained tight lipped when speaking about the young striker, stating that he can see why there’s a connection, but there’s nothing in it.

“[There’s] nothing much other than I know Dominic well,” told Rodgers, as quoted by STV.

“I took Dominic into Chelsea when he was eight years of age.

“When I was academy director at Reading I left to go to Chelsea back in 2004 and at that time Dominic was one of the first young players I took in.

“He worked at the development centres at Reading and when I moved to Chelsea we took him in.

“I’m delighted for him and the career that he’s had up until now as a young player. He’s a fantastic talent but [I can say] no more that. I only speak on him because I know the player.

“He’s a big talent and it’s unfortunate that he’s maybe not going to renew his contract at Chelsea because it’s a great club but he obviously deems that his future lies elsewhere.

“Apart from that, nothing else to add. I can see where there’s maybe a connection with him but nothing more than that.”

The Daily Record claimed that Celtic were ready to take advantage of cross-border rules which would enable them to snap up Solanke at the fraction of the reported £8million development fee that English clubs would have to pay for the teenager, who is out of contract at the end of the season.

The young Chelsea striker has made just one appearance for the senior team during his 13 years at the club, which came in a Champions League group match against NK Maribor in 2014 where he came on as a 17-minute substitute.

He has also spent time out in Holland with Vitesse Arnhem during a loan deal, where he scored seven goals in 26 outings for the club.

Solanke will now be looking to push on with his career while he still has time on his side and it would not be too surprising if Celtic do still make a move despite Rodgers’ comments.

In other Celtic transfer news, the Hoops have agreed a deal with an English club for this 19-year-old after passed medical.