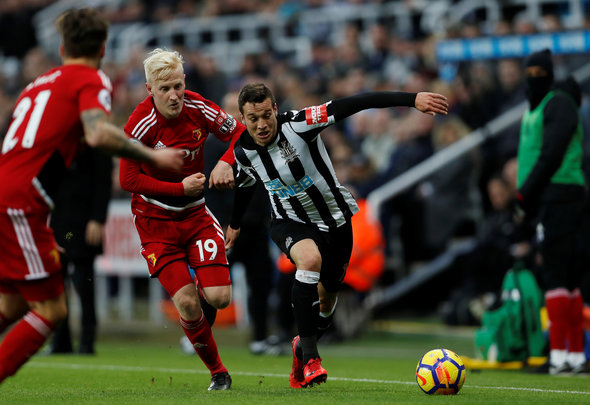 Newcastle United legend Alan Shearer has said that Watford deserved to win by six goals in the two clubs’ clash at St James’ Park on Saturday.

Goals from Will Hughes and Andre Gray, which sandwiched an own goal from American international DeAndre Yedlin, saw the Magpies fall to a bitterly disappointing 3-0 defeat against the Hornets.

It was the fourth successive defeat for Rafael Benitez and his men, after losses to Burnley, Bournemouth and Manchester United previously, and sees them slip to 13th, just four points clear of West Ham in the first spot in the relegation zone.

Reacting to the match on his personal Twitter account, Shearer suggested that 3-0 was a flattering scoreline for the home side, insisting that 6-0 would have been a more appropriate result considering the performances on display.

So much for being difficult to beat!! Could have and should have been 6. Horror show today from @NUFC #NEWWAT

Shearer blasted claims that Newcastle have proven to be hard to break down and beat, with this result meaning that they have conceded seven goals in their last two outings, having seen Jose Mourinho’s Manchester United side secure a 4-1 win last week.

Benitez and his players will be hoping to bounce back to winning ways when they travel to take on West Brom on Tuesday, with the Baggies, currently managerless and under the stewardship of caretaker boss Gary Megson, having pulled off a 1-1 draw with Tottenham on Saturday

In other Newcastle United news, Benitez has delivered a positive statement on the future with takeover talks surrounding the club.