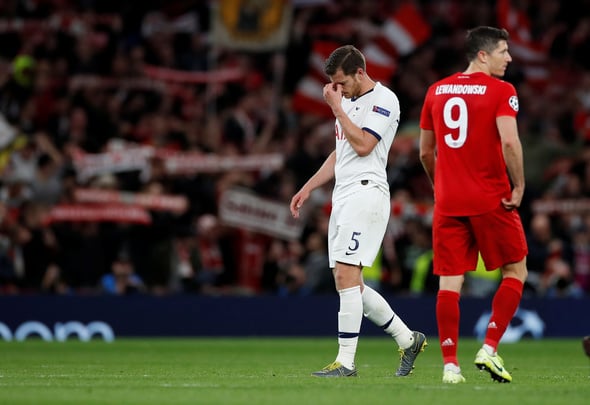 Danny Mills has ripped into Tottenham duo Jan Vertonghen and Serge Aurier and called them “passengers” for their performances against Bayern Munich in the Champions League on Tuesday.

Speaking exclusively to Football Insider assistant editor Russell Edge, the former Manchester City and England international says that nearly everyone in a Spurs shirt failed to deliver against the German giants but that it was the two defenders who were weighing the side down the most.

Tottenham took the lead through Heung-min Son in north London before Bayern took charge, Harry Kane’s penalty making it 4-2 before the Germans struck three times in the final 10 minutes to embarrass the Lilywhites in front of their own fans.

Mills says that no one lived up to expectation for Mauricio Pochettino’s men but singled out the Belgian and Ivorian internationals as the weakest links for the Argentine boss.

“If they’re not, it can be difficult and problematic, you only need one or two passengers and it starts to fall down. (Who was a passenger v Bayern?) Jan Vertonghen looks out of sorts, Aurier doesn’t look right at right-back.

“There are clearly issues at Tottenham that go deeper than what we see on the face of it. To lose in a humiliating defeat at 7-2, at four your should just shut up shop.”

Neither Aurier or Vertonghen started the season in Pochettino’s starting XI, the right-back behind Kyle Walker-Peters and Davinson Sanchez in the pecking order before returning to the line up in recent weeks.

The Belgian defender meanwhile was forced to spend a number of games on the sidelines before taking his place back alongside Toby Alderweireld.

In other Tottenham news, Darren Bent has suggested that Pochettino has huge regrets over one player who was benched on Tuesday.