Alan Hutton has tipped pacy Leon Balogun to start for Rangers against Royal Antwerp after returning to the starting XI for the win over Kilmarnock.

The former Gers and Scotland defender, speaking exclusively to Football Insider, suggested Steven Gerrard had dropped a major hint about his selection plans by rotating his centre-backs before Thursday’s Europa League knockout tie.

Balogun had been on the bench for the Light Blues’ four league fixtures before the win over Killie, with Filip Helander preferred as Connor Goldson’s partner.

However, the 32-year-old, who was signed on a free after leaving Wigan Athletic last summer, started five of the Gers’ six Europa League group stage ties.

Hutton insisted Balogun has the advantaged when it comes to pace compared to his Swedish counterpart and tipped the Nigeria international to get the nod on Thursday night.

“We always know it’s Connor Goldson plus one other so the way I’m looking at it is Balogun came in at the weekend so I wonder if that’s the thinking behind the European game,” Hutton told Football Insider assistant editor Russell Edge.

“Obviously he’s got that little bit of extra pace over Helander so, thinking ahead towards Thursday night, maybe Gerrard is more looking towards that. Give him a game before the big Thursday night game, get him bedded back in and use his pace.

“Defensively I think they are very similar but obviously Balogun just edges it for pace.” 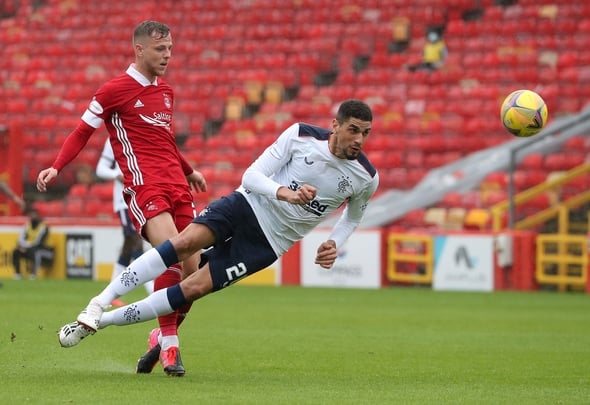 Balogun has a total of 21 appearances under his belt for the Gers so far, although he has never managed to start more than four consecutive league games.

Rangers have only conceded three goals in the 15 Premiership games the Nigerian has started in.

In other news, Football Insider can reveal the reaction of the Rangers dressing room after four breach lockdown rules.