Darren Bent has branded the SPFL-Rangers civil war an “absolute shambles” and claimed it is increasingly likely Celtic could suffer title heartache.

The former England striker, speaking exclusively to Football Insider assistant editor Russell Edge, believes the Scottish Premiership season will have be declared null and void if the situation cannot be sorted out immediately.

In a letter to clubs, as relayed by the BBC, SPFL independent non-executive director Karyn McCluskey states there was “no evidence of improper behaviour by SPFL personnel concerning the submission of the Dundee FC vote” after an investigation by Deloitte.

Rangers have since reiterated their demands for an independent inquest into the whole resolution process, stating Deloitte’s investigation “alarmingly failed to examine wider fundamental issues.”

The Light Blues released another statement last night to reveal they will provide evidence to all member clubs well in advance of a general meeting to approve an independent investigation.

Bent believes cancelling the season is an increasingly likely possibility.

He told Football Insider: “The only thing I can see happening after this whole situation is (to) null and void it. I think if they can’t get some kind of decision where they can all get on side, I think they’ve just got to null and void it.

“With the whole voting system up there it’s a shambles, it’s an absolute shambles so I think what can they do?

“At the end, the SPFL are going to have to make a decision by themselves and say if we can’t all get on the same page, what other options are there?” 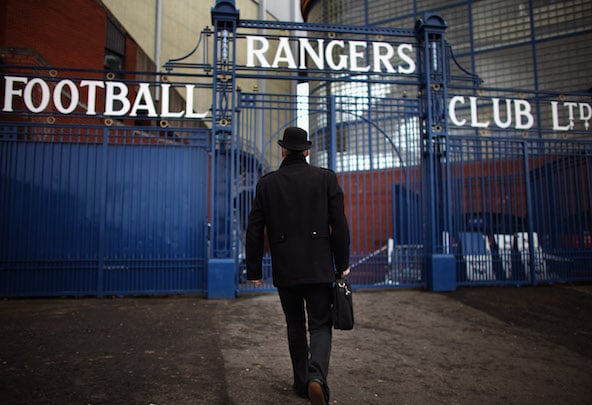 With the season suspended, Rangers sit 13 points behind table-toppers Celtic after playing a game less than their Glasgow rivals.

The Old Firm pair were set to go head-to-head on the weekend that football across Scotland was postponed due to the Coronavirus pandemic.

In other Rangers news, Brown has claimed Gerrard on the phone “every day” over signing: “Celtic are aware…”.