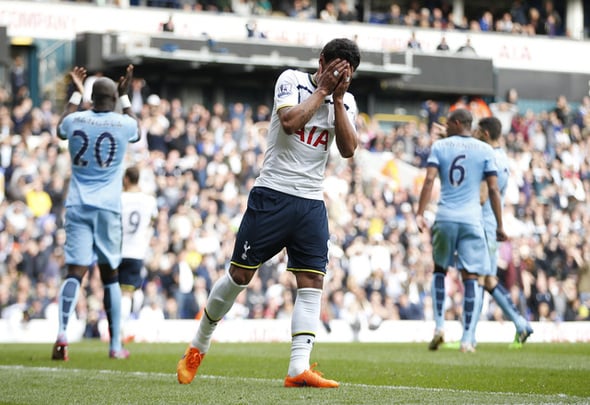 Paulinho has insisted that he was not handed enough opportunities to impress at Tottenham by Mauricio Pochettino.

The Brazil international has revived his career in China with Guangzhou Evergrande since his unhappy two-year spell at Spurs came to an end when he was sold in the summer of 2015.

Paulinho, 28, made a strong initial impact when he signed for a then club-record fee of £17million in 2013 and was a regular in his favourite central midfield role until Andre Villas-Boas was sacked in December of that year.

The subsequent appointments of Tim Sherwood and Pochettino led to a 18-month spell in which the Brazilian was shunted in and out of the team and between different positions.

There was a sense of relief among the White Hart Lane faithful when Spurs sold Paulinho at a loss, as many supporters had lost faith in him.

The player is convinced he could have been remembered more positively if given more opportunities by the much-feted Pochettino.

“In my first season, I played the entire season in my central midfield role,” Paulinho told Goal. “I did well but then we had a change of coach as Andre Villas Boas left and that Englishman (Sherwood) came in.

“Then Mauricio Pochettino arrived and I did not play much. I only played a maximum of 4 matches in my preferred role and sometimes as a no.10.”

Asked if he held grudges, Paulinho denied that was the case. “No, no I don’t hurt. Pochettino had his options and at that time he thought I was not the best option for him.

“But I do think that if he gave me the opportunity in my role then I would have convinced him. When I saw that it was not there, I decided to leave.”

Paulinho has done so well with Guangzhou that he was recalled to the Brazil team last year and played in seven of their eight World Cup qualifiers as they clinched a place in the 2018 tournament before any other side.

In other Tottenham transfer news, the club have sensationally terminated the contract of one of their emerging stars.