Multiple Scottish Premiership clubs have submitted loan bids for Graham Dorrans as he edges closer to leaving Rangers before the transfer deadline, Football Insider has learned.

The Light Blues are ready to offload the midfielder, 32, before the Scottish transfer cut-off after he slipped down the pecking order in Steven Gerrard’s revitalised side.

Ibrox sources have told Football Insider there are two SPL clubs keen on Dorrans, with Kilmarnock one of those who have tabled offers.

There is also interest in Dorrans from clubs in League One and League Two in England, where the window for transfers remains open until Monday.

The central midfielder, who joined from Norwich City for £1.5million in the summer of 2017, is surplus to requirements after being frozen out of the Rangers squad this season.

He has yet to feature in the current campaign after making just three appearances last season following a series of serious injuries during his time in Glasgow.

The former Scotland international has entered the final year of his contract at Rangers, where he has made only 23 appearances in total for the club he supported as a boy.

Football Insider revealed in early April that Rangers were ready to offload Dorrans this summer after an injury-ravaged two years at the club.

The writing was on the wall after he was one of four senior players left out of the squad for the pre-season training camp in Portugal, along with Kyle Lafferty, who has subsequently had his contract terminated and joined, Jason Holt and Eros Grezda.

In other Rangers news, it can be REVEALED that the club beat Leeds to attacker signing after ‘Inspiring’ sales pitch. 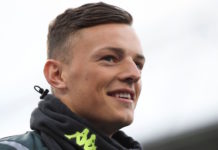