Everton striker Romelu Lukaku has bagged more goals at the age of 23 than Cristiano Ronaldo and Luis Suarez had at the same age.

The Belgium international scored a hat-trick against Sunderland on Monday evening and helped increase the impressive stat, which has amplified his scoring ability at a young age.

The three-goals against the Black Cats has taken his tally up to 122 goals in the early stages of his career, while Cristiano Ronaldo had scored 110 goals when he was Lukaku’s age with Suarez falling three goals behind with 107.

However, Lukaku still has some way to go to reach the heights of Barcelona duo Lionel Messi and Neymar, who both scored 150 goals and 183 goals respectively.

Italian football site Sport Media Set showed a chart of Europe’s elite forwards goals at the age of 23 on their official Twitter account.

Lukaku moved to Everton in 2014 from Chelsea after an initial loan spell for a club-record £28million fee.

His last goals for the Toffees before Monday evening came in an FA Cup clash in March against his former Stamford Bridge side.

The striker also bagged two goals for Belgium against Cyprus last Tuesday and he will be hoping that he has begun a scoring run.

In other Everton team news, Ronald Koeman will hold talks with midfielder Ross Barkley on Tuesday in a bid to help him rediscover his best form. 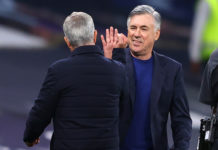