Alan Hutton claims that Alfredo Morelos is harming his chances of securing a move away from Rangers with his performance levels this season.

Speaking exclusively to Football Insider assistant editor Russell Edge, the former Gers and Scotland star has ripped into the 24-year-old’s poor displays and suggests either suitors could look elsewhere or reduce what they would be willing to pay for him.

The Colombia international has started all four of the club’s league games, as well as the rescheduled Europa League tie against Bayer Leverkusen, and has chipped in with two goals and two assists. 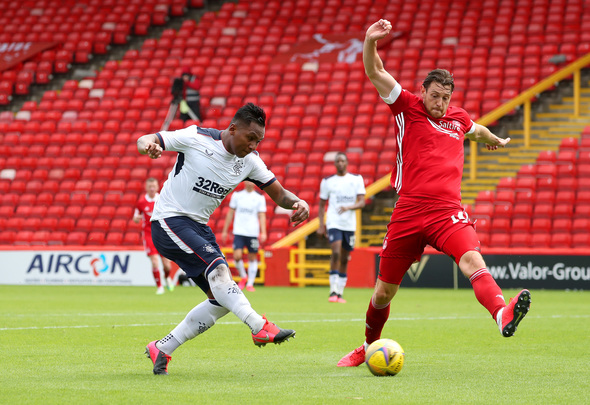 However, he has come under heavy scrutiny after manager Steven Gerrard admitted the striker’s head had been turned over a move away.

Hutton admits he is less than impressed with what he has seen from the Gers’ attacking talisman and suggests he could be putting a future move at risk with his sub-par performances.

Hutton told Football Insider: “We’re just continuously talking about him, aren’t we? It’s frustrating for everybody involved. I thought at the start of the season he was way off it.

“I thought he looked overweight, for me, in the Aberdeen game, and then he didn’t ever really get going.

“Yes, he scored a couple of goals against St Mirren, he set a goal up and then we thought things had changed, his head’s more on it, he had the chat with Gerrard and maybe it gave him the spur he needed.

“He’s not helping himself – if he does want to leave, you need to be performing week in, week out for your club and people could be looking at this now, thinking: ‘Well is it worth shelling out that sort of money?’

“It could affect the transfer value but you have to do what is best for the team, in my opinion.”

In other Rangers news, it can be REVEALED a midfielder is close to completing a move away from Ibrox.