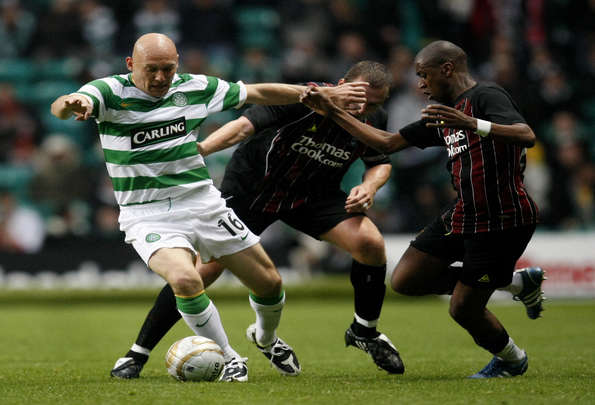 Massive things were expected of the Danish midfielder after he joined the Hoops in 2006 from Real Madrid for £2million. But even two goals against Rangers couldn’t make him a regular in the first-team.

He was eventually loaned out to former club Everton then had his contract paid off.

Gravesen claims Strachan was far too cautious in his style of play.

“I ran into an opposition to myself in the form of a coach called Gordon Strachan” he said, as quoted in a rare interview with Danish newspaper Tipsbladet.

“He clearly had the best team, and yet we did not have the opportunity to go out and play.

“Gordon was a defensively-minded coach of a world-famous club.

“His time was unfortunately while I was there. It did not work between him and me.

“He was nervous about losing, afraid of losing a match as the boss of the mighty Celtic.”

Whilst Gravesen’s career ended with a whimper, Strachan took the Hoops to the last 16 of the Champions League on two occasions and won three league titles in a row before leaving in 2009.

Thomas Gravesen is being far too harsh on Gordon Strachan. The main problem Gravesen had is that he was far too undisciplined at times, and failed to dominate games in the way he was signed to do. This is particularly true of Europe, where he didn’t really stand-out in any of the Champions League matches he played in. Strachan doesn’t really get the credit he deserves from Hoops fans, as he achieved some excellent results – especially in Europe – with a team who you couldn’t say had plenty of stars. There were the flair players like Shaun Maloney and Aiden McGeady, but there was also the likes of Stephen McManus and Gary Caldwell, who weren’t the most pleasing on the eye but got the job done. That was the problem with Gravesen, he didn’t work hard like the rest of his team-mates and it was no surprise that his time in Glasgow lasted only a season.

In other Celtic news, the Hoops must swoop for this player with a tempting release clause