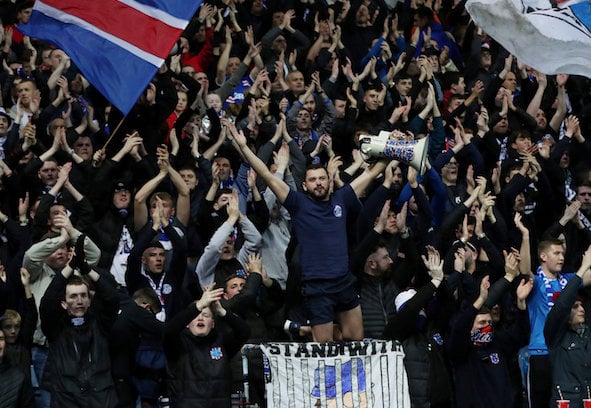 Noel Whelan has heaped praise on Rangers fans after the club confirmed that 32,000 season ticket holders renewed ahead of next season.

Speaking exclusively to Football Insider correspondent Dylan Childs, the former Leeds United and Aberdeen forward insisted the Teddy Bears need a lot of credit for their financial commitment to the club in difficult circumstances.

The Gers confirmed that 32,000 fans had chosen to renew their season tickets despite uncertainty as too whether supporters would be allowed to return to stadiums this year.

The Scottish Premiership was curtailed last month so the season is scheduled to recommence on August 1 but that date will be subject to review by the SPFL.

Whelan was hopeful supporters across the UK could return to grounds soon.

“The fact that the fans, despite not knowing what is happening and when they will be able to return, are committing to their season tickets, wow, just shows a love for the club,” he told Football Insider.

“They are clearly excited by the team they have got and to get back to Ibrox. The fans deserve a lot of credit.

“We need to watch this space now and hope that supporters can return sooner rather than later.”

The club also announced that their membership scheme, MyGers, grew to 16,000 – the largest in Scotland – as the waiting list for a season ticket at Ibrox grows.

Season ticket holders will be given access to all home fixtures on RangersTV in the event that they cannot attend the fixture.

In other Rangers news, it can be REVEALED that Ivan Toney has told friends his plans this summer.