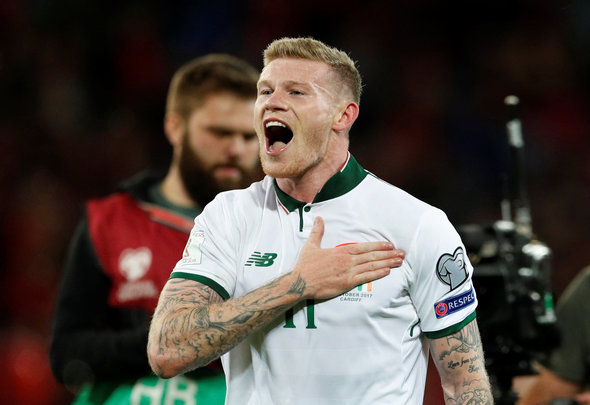 Celtic fans have taken to Twitter to troll Rangers after it was reported that they had agreed a fee to sign Jamie Murphy from Brighton.
Sky Sports claimed on their live transfer blog on Thursday [01:28PM] that the Light Blues had an offer worth £1million accepted for Murphy, 28, meaning that he could potentially be at Ibrox by the end of Thursday.
The Scottish Sun had earlier in the day reported that the former Motherwell striker would be due to jet in to Glasgow to undergo a medical before his move was finalised
It was understood that the Premier League forward would also put pen to paper on a three-and-a-half year deal at Ibrox to potentially make him a Rangers player by the end of play on Thursday.
Celtic fans were quick to take to Twitter though to poke fun at their bitter Glasgow rivals for signing a player who they believe to be well under the quality of those in their squad.
One fan even pointed out that the Gers are signing players with Irish names after Sean Goss was snapped up on Wednesday and joked that James McClean could be next at Ibrox.
Here is a selection of their tweets:
https://twitter.com/Gerrymcfadyen/status/948914614917648385

What do u think of Murphy coming for a medical Phil 1mill fee agreed wage bill must be going through the roof.

https://twitter.com/DavidHughes45/status/948925009984147456
https://twitter.com/lewissd16/status/948926001849028608
Rangers signed Sean Goss from QPR on loan on Wednesday and he is expected to be part of the squad that jets out to the USA this month to take part in the Florida Cup.
In other Rangers news, the Gers are in the hunt for this brilliant playmaker from an SPFL rival.
We’ve launched a << BREAKING NEWS FEED>> exclusively for your club. ‘Like Us’ on Facebook by clicking here if you want 24/7 updates on all Rangers breaking news.