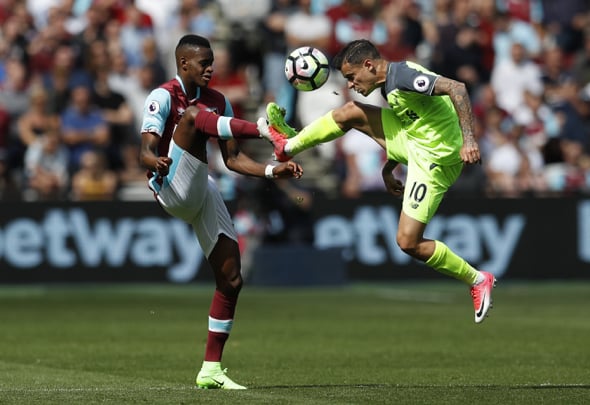 Former Spurs star and BBC pundit Jermaine Jenas has raved about Liverpool midfielder Philippe Coutinho after his performance in the win versus West Ham.

The Reds steamrollered West Ham at the London Stadium, winning 4-0 thanks to a brace from the Brazilian, as well as goals from Daniel Sturridge and Divock Origi.

Coutinho assisted Sturridge’s goal, playing a fine defence-splitting ball, before going on to grab both of Liverpool’s next two goals for himself.

The 24-year-old has been in fine form for Jurgen Klopp’s side this campaign and has now netted 12 goals and supplied seven assists in 30 Premier League appearances.

After a loss to Crystal Palace and a draw with Southampton in their last game, Liverpool needed a win and Coutinho was instrumental in that.

Speaking on BBC 1’s Match of the Day 2 (Sunday 10.30pm), Jenas was keen to heap praise on the Brazilian maestro.

“He was sensational,” he said. “Jurgen Klopp went with a diamond in midfield and he orchestrated things from that midfield position. Players react when he gets on the ball.

“It was an unbelievable display. At the time when Liverpool needed it most he was sensational.”

With the result Klopp’s Reds move above Man City into third, knowing that a win in their final Premier League game of the season will see a top-four place secured.

Since signing at Anfield in January 2013 from Inter Milan for £11million, Coutinho has gone onto become one of his club’s key players and has made 180 appearances in all competitions, scoring 41 goals and laying on 37 assists.

In other Liverpool news, fans reacted to this reported signing who could cure the left-back problem.